American Eagle announced in 2014 that, in an effort to present more realistic role models for teens, it would not be using Photoshop to retouch images for its new Aerie lingerie campaign, #AerieREAL. However, up until the brand’s recent decision to name curvy model Barbie Ferreira as the face of its upcoming swimwear collection, the campaign had yet to feature any models that fit the so-called “plus-size” label.

Read More: Meet the Curvy Model Whose Unretouched Photos Are Taking the Internet by Storm

In her first video for the campaign, Lawrence gets emotional as she speaks about female empowerment and what it really means to be beautiful. “I wanted to be a part of the campaign so much,” she says. “I got told I wasn’t good enough, and I could never make it. And then Aerie told me I was beautiful because I was me. You don’t need to be retouched. The real you is beautiful.”

Watch the full spot above. 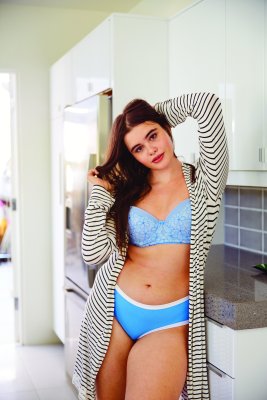 Meet the Curvy Model Whose Unretouched Photos Are Taking the Internet by Storm
Next Up: Editor's Pick