Ever since Bob Iger took over as CEO of Disney in 2005, the stock has risen 300%—five times better than the Dow. Now Iger wants Wall Street to know that Disney is still growing strong under his leadership, tumbling markets be damned.

He got his chance to make the point on the evening of Feb. 9. Disney delivered earnings that blew past analyst estimates thanks to the success of Star Wars, and yet jittery investors hammered the stock down as much as 7% on the news. In a market shellshocked from an abrupt selloff that has sucked $6 trillion in value from global stocks in five weeks, even good news starts to sound like bad news.

On a call to discuss earnings, Iger explained Disney’s growth in detail, only to be peppered by questions that are normally reserved for a company in crisis. Would Disney consider splitting itself up? Why buy back so much stock instead of pursuing M&A deals? Above all, is Disney’s TV business, including ESPN, at risk from massive cord cutting?

Iger was having none of it. As the call wore on, he grew defensive, tetchy, even exasperated. He boasted that, on a compounded basis, Disney has grown by 14% a year. “Pretty damn strong, too,” he added, prompting an analyst to ask, “How should we think through the natural growth rate from here?”

“You should think nothing but happy thoughts about this company,” Iger said bluntly. “All right,” the analyst replied. “I didn’t mean to ask an unfair question.”

The question was entirely fair, yet one can understand Iger’s impatience with a market that has gone from hailing him as one of the most successful CEOs of the past decade to the captain of a ship that is looking outdated in the age of Netflix.

Here is a CEO who did a remarkable job of not just turning Disney around but building a strategy for years of solid profit growth. Who shed less profitable businesses in favor of powerhouses like Pixar, Marvel and Lucasfilm. Who, in the wake of a long and bitter board battle, remade Disney as a smooth-operating media giant in the 21st Century.

Talk of the 65-year-old Iger retiring has left investors uneasy in recent years, and so he has extended his tenure as CEO twice to keep his plan on track. But Disney’s stock has lost nearly a quarter of its value over the past six months, following reports last summer that Nielsen counted 3.2 million fewer ESPN subscribers during the previous year. Iger later confirmed that ESPN saw “some modest sub losses,” but not as many as Nielsen claimed.

That fed a narrative that Disney’s television unit, which makes up about 45% of its total revenue, was suffering a slow death by millions of cable-cord cuts. Yesterday, though, Iger said Nielsen’s numbers on cord cutting were wrong. “Nielsen corrected those numbers, reducing the loss of subs by some 2 million households.” Instead, Iger realized that the loss in ESPN subscribers “was largely due to the fact that ESPN was not part of skinny bundles that had launched.”

The distinction may seem slight, but it matters. The “skinny bundles” are trimmed-down cable packages that have recently emerged, such as the 16 channels offered for $20 a month by Sling TV. These are pay-TV models offered over the Internet for people with no hunger for the basic-cable buffet. In short, ESPN’s decision to eschew these packages was eroding its subscriber base.

Now, Disney still sees most ESPN subscribers keeping their cable subscriptions, but it’s opening up to new digital models. That’s a reversal from Disney aversion to non-cable avenues like Sling, and it seems to be working. “In the last couple of months, we have actually seen an uptick in ESPN subs, which is encouraging.”

On the call, Disney executives returned again and again to the topic of ESPN to praise it as a robust asset. Four out of five adults in the U.S. connect with ESPN on some platform every month. Ad revenue from the channel rose 25% last quarter. But analysts kept looking for cracks in this shiny facade. Would, for example, a shift to newer platforms hurt Disney’s ability to negotiate contracts with the cable giants?

Iger was blunt again. “I actually believe that this notion that either the expanded basic bundle is experiencing its demise or that ESPN is cratering in any way from a sub perspective is just ridiculous,” he said. “Sports is too popular. And it’s not just at ESPN.”

As he spoke, Disney’s stock rebounded, but was still trading around 2% below its official close Tuesday. That may be due to lingering uncertainties, which a lack of guidance did little to dispel. Asked why ESPN subs had ticked up, Iger said he didn’t know. Asked whether the downward trend in subscriptions was abating, he replied, “We really don’t know. We just feel great about the product and we believe that the predictions that many have made are more dire than they should be.”

If that’s the case, it would be welcome news to Disney’s investors. For now, many of them remain jittery, and Disney’s lack of guidance isn’t helping. Still, it’s rare to see a CEO not passively blame weakness on a slowing global economy but instead loudly defend his company’s strengths. 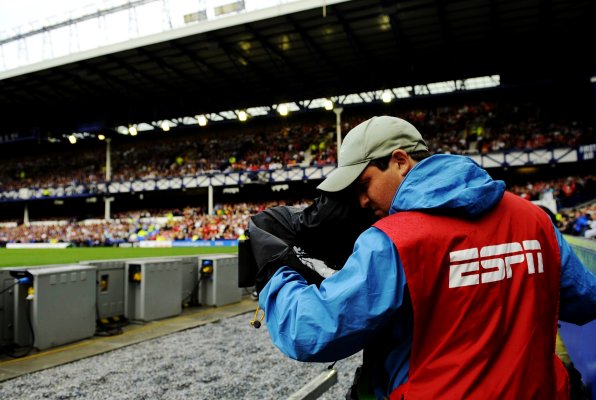