Donald Trump often boasts about not being politically correct, but he took it one step further Monday night in New Hampshire when he repeated a dirty name for Ted Cruz.

The word was first yelled by a woman in the audience in Manchester, N.H., when Trump was talking about the Texas Senator not being pro-waterboarding, which Trump earlier on Monday said is “the least form of torture, if it’s torture at all.”

“He’s a pussy!” the audience member yelled about Cruz.

Trump then repeated the phrase into the microphone to an arena of about 5,000 people.

“You’re not allowed to say, and I never expect to hear that from you again,” Trump said when he heard the woman. “She said he’s a pussy.”

At the end of the rally, Trump also quipped that he didn’t care if supporters died in the snowstorm raging outside.

“I don’t really care if you get hurt or not, but I want you to last until tomorrow,” he said of people driving home after the event. “If you’re going to drive like a maniac, do it tomorrow after you vote. And I promise I will come and visit you in the hospital.” 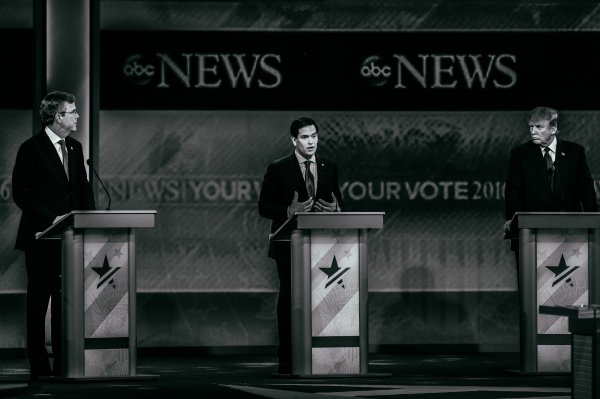 How Donald Trump and Bernie Sanders Can Lose by Winning
Next Up: Editor's Pick