Erin Brockovich: It's Not Just Flint—America Has a Scary Water Problem

Matt Hopper holds his daughter after having her blood drawn to be tested for lead, in Flint, on Jan. 26, 2016.
Brett Carlsen—Getty Images
Ideas
By Erin Brockovich and Ken Cook
Erin Brockovich is a consumer advocate, and Ken Cook is president of the Environmental Working Group.

Most Americans take our drinking water for granted: turn the tap, fill a glass and drink. Only when a community’s health and safety are imperiled do we pay heed to the threat of industrial chemicals in our water supplies. The grave danger of lead poisoning to the children of Flint, Mich., has rightly riveted the nation’s attention, but another shameful and all too familiar story is unfolding in a village in upstate New York.

The water in Hoosick Falls, N.Y., isn’t poisoned with lead, but with a chemical that for decades was a key ingredient in making Teflon and hundreds of other products. Perfluorooctanoic acid, or PFOA, belongs to a class of chemicals that have invaded the bodies of people and animals in the farthest reaches of the globe. PFOA pollutes the blood of almost all Americans and can pass from mother to unborn child in the womb. It builds up in our bodies, and studies have shown it can cause cancer, reproductive disorders and other serious illnesses.

The contamination of Hoosick Falls’ water was revealed through tests paid for by resident Michael Hickey, who became concerned over the unusual number of cancer cases in the village. His father died of kidney cancer in 2013.

Hickey’s tests detected PFOA in the town’s water at levels well above the non-enforceable health advisory of the U.S. Environmental Protection Agency. As in Flint, local and state authorities downplayed the threat, but Hickey and others would not be silenced. In December, the EPA finally warned residents not to drink or cook with the water.

Since 2013, a nationwide EPA program to sample water for unregulated contaminants found PFOA in 103 public water systems in 27 states. But no tests were conducted in Hoosick Falls because the water supply serves fewer than 10,000 people. New Jersey officials did more extensive tests using stricter methods, and found that EPA’s protocols would have missed three-fourths of the contamination by PFOA and related chemicals in the state.

Saint-Gobain Performance Plastics, the plant where Michael Hickey’s father worked for 32 years, used PFOA to manufacture heat-resistant wiring. The company is providing bottled water for residents and paying for a filtration system

It’s a story we know too well.

Last year an Ohio woman won a $1.6 million settlement against DuPont for kidney cancer caused by exposure to PFOA. She was among tens of thousands of people whose water was poisoned by PFOA from DuPont’s plant in Parkersburg, W.Va.. More than 3,000 other area residents are suing DuPont, but it could take the best part of a century to try all the cases.

Internal DuPont documents show that the company had long known PFOA was hazardous and was fouling water systems. Today neither DuPont nor other makers and manufacturers of PFOA have revealed all the places the chemical may be lurking in drinking water.

These companies should immediately disclose every place PFOA was manufactured, used or dumped. EPA and local and state authorities should make sure the water in each location is tested.

But that’s trying to deal with the problem after the fact. The bigger problem is the nation’s broken and outdated chemicals law. The Toxic Substances Control Act is so toothless that DuPont was able to keep the truth about PFOA secret. When the EPA found out, DuPont was fined a tiny percentage of its profits from Teflon. Lacking authority to ban the chemical outright, EPA had to negotiate a phaseout that ended last year.

During the 10-year phaseout, DuPont and other companies introduced dozens of similar chemicals to the marketplace that likely have not been adequately tested for safety. In many cases, even the names of these replacement chemicals are trade secrets.

Last year, Congress passed two bills to update the Toxic Substances Control Act. But neither goes nearly far enough to protect public health. Real reform would ensure that new chemicals and those already on the market are safe, and that the most dangerous substances are quickly reviewed and regulated. Otherwise, more tragedies like those in Flint, Hoosick Falls and Parkersburg are sure to surface. 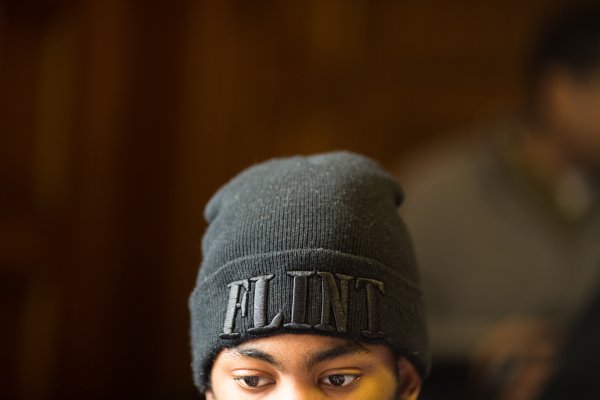 Flint Officials Must Pay for Poisoning Black, Poor Community
Next Up: Editor's Pick