Larycia Hawkins, a Christian who is wearing a hijab over Advent in solidarity with Muslims, attends service at St. Martin Episcopal Church in Chicago on Dec. 13, 2015.
Stacey Wescott—Chicago Tribune/TNS via Getty Images
By Elizabeth Dias

The provost of Wheaton College in Illinois’ emailed faculty Saturday night saying that he had revoked his recommendation to fire the school’s first tenured black female professor, Larycia Hawkins, who been under fire after she wrote a Facebook post saying Christians and Muslims worshiped the same God.

Stanton Jones asked for her forgiveness and apologized for his “lack of wisdom and collegiality” in enforcing her administrative leave. He added that “it was never my intent to call the sincerity of her faith into question.” News spread quickly online, including via news outlets like the evangelical Christianity Today, that Wheaton had reinstated Hawkins after the provost’s apology.

The opposite was true.

Just two hours after his apology, Wheaton College and Hawkins issued a joint statement that they had “reached a confidential agreement under which they will part ways.” The statement, posted on the college’s website, framed Hawkins’ departure as a moment of unity. “Wheaton College and Associate Professor of Political Science Dr. Larycia Hawkins announce they have come together and found a mutual place of resolution and reconciliation.” (The evangelical school is not affiliated with a separate liberal arts institution called Wheaton College in Norton, Mass.)

The terms of the separation agreement have not been—and may never be—released. The school will host a private “reconciliation service” on campus Tuesday night, where both Hawkins and the school’s president, Philip Ryken, will speak. Wednesday morning, the parties will hold a joint press conference in downtown Chicago at Chicago Temple First United Methodist Church in pursuit of “public reconciliation.” Neither party will respond to questions before, during, or after the press conference, according to the joint statement.

Several members of the Wheaton community greeted the news by signaling their concern with the resolution. Some professors changed their social media profile pictures to photos of them holding “We support Dr. Hawkins” signs. One announced he would wear black the rest of the semester as a public lament of the outcome.

Gary Burge, professor of New Testament, commended the provost for his decision to publicly apologize to Hawkins but remains puzzled by the university statement. “We are left wondering why the president’s reconciliation with Dr. Hawkins does not include her remaining on our faculty,” Burge said. “Was this ‘reconciliation’ predicated on her willingness to leave? And we wonder: what is the relationship between reconciliation and restoration?”

Ezer Kang, associate professor of psychology, wondered how the school will engage issues of diversity going forward. “Looking ahead, if Wheaton earnestly wants to make ‘space for the right kinds of open dialogues about race that really lead to deeper understanding’ of other cultures, but is silenced by influential constituents who play the religious liberty card to squelch dialogues that ruffle their evangelical feathers, any strategic priority to ‘deepen ethnic diversity’ is perfunctory and hallow,” he said, referencing the school’s publically stated diversity efforts.

The institution has been under intense public pressure for the past two months, and conflict had only intensified in recent days. The school’s faculty diversity committee, an elected body on campus, issued an advisory memo calling the administration’s proceedings against Hawkins “discriminatory on the basis of race and gender, and, to a lesser extent, marital status.” Nearly 80 faculty members wrote to the administration asking the provost to withdraw his termination proceedings against Hawkins, explaining that they had “carefully examined” Hawkins’ theological defense of her actions and comments and found that she “has not failed to affirm or model the Wheaton College Statement of Faith or Community Covenant,” the school’s guiding theological documents.

Hawkins was scheduled to appear before a faculty trial on February 11, where the provost would prosecute her, and the Board of Trustees was slated to make the final decision about her employment soon after. The separation preempts that process.

The decision also comes at a critical time for the institution—the school has quietly been beginning a $175-million capital campaign, slated to go public in the coming months. The campaign, called “From the Heart, For the Kingdom,” involves plans for new music conservatory facilities, a new college welcome center, and some new student housing, and student housing, according to local news reports and various promotional materials. Studies for the project began in 2013, and the local city council reviewed architectural plans in early 2015.

Just weeks before Hawkins donned a hijab and posted her comment on Facebook, the college was searching for a marketing specialist to implement the campaign until it concludes in 2018, and filled the position, according to postings on LinkedIn. The college has also been searching for a new provost, after Jones announced before the Hawkins’ controversy that he was retiring from the post at the end of this academic year.

Even as Hawkins departs, many unanswered questions remain. Wheaton administrators have not yet addressed their stated theological concerns about evangelical Christianity’s relationship to Islam. Thomas Kidd, history professor at Baylor University, notes that the suggestion that Muslims and Christians worship the same God has only recently become more common in evangelical circles, in part due to influential voices like President George W. Bush and Pope Francis, and in an effort to offer “appealing witness” to Muslims.

“Evangelical colleges often pride themselves in helping students to be globally-minded and informed about world religions, even as they hold up the unique truth of Christianity,” he says. “But the tension remains, as illustrated by the Wheaton controversy, that traditional Christians and traditional Muslims believe very different things about who God is.”

Evangelical communities in the Middle East are already feeling the Hawkins-Wheaton split. Jeremy Courtney, an evangelical Christian who lives in Iraq and cofounded the Preemptive Love Coalition, an international development organization, says it has been “extremely disheartening” to watch this situation at Wheaton unfold. “Wheaton risks setting the Church back decades in our efforts to advance relationships with Muslims,” he says. “There are countless pastors and parishioners eager to celebrate the significant common ground shared between Muslims and Christians in an effort to combat ISIS, welcome refugees, and create communities of hospitality for Muslims.”

In an email to students, faculty, and staff to inform them of Hawkins’ departure on Saturday night, school president Ryken said that he has asked the school’s Board of Trustees to conduct a “thorough review” of the situation, “including concerns related to academic freedom, due process, the leaking of confidential information, possible violations of faculty governance, and gender and racial discrimination.” He added: “One of the main purposes of this review will be to improve the way the College addresses faculty personnel issues in the future, especially when these issues relate to our Statement of Faith.”

The controversy has ultimately exposed fault lines in the school’s mission to be a model of evangelical education. “For Christians, reconciliation is based on truth,” said George Kalantzis, professor of theology and director of the Wheaton Center for Early Christian Studies. “I am also hopeful that the Administration, board of trustees, and all of us in the Wheaton College community will model a commitment to truth and the needed transparency that is required in the conversations we will have in the coming months.”

Added Kalantzis: “Only time will show if actual reconciliation and healing can occur without Dr. Hawkins in our midst.”

Elizabeth Dias is a correspondent for TIME covering religion and politics. She is a graduate of Princeton Theological Seminary and Wheaton College, Ill, where she studied theology. 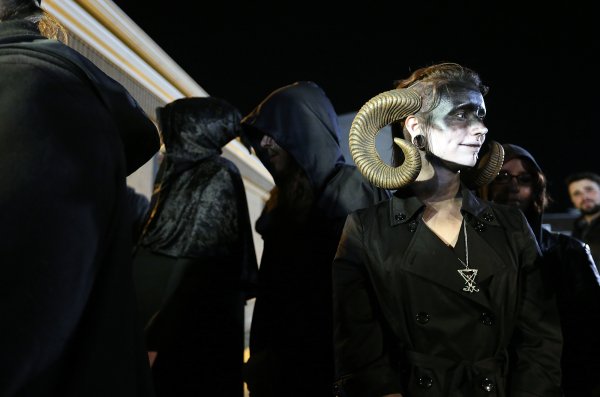 Satanic Temple Gets Phoenix to Ban Prayer at Public Meetings
Next Up: Editor's Pick