Carolina Panthers Josh Norman (24) sits on the bench after the NFL Super Bowl 50 football game against the Denver Broncos Sunday in Santa Clara, Calif., on Feb. 7, 2016.
Marcio Jose Sanche—AP
Ideas
By Josh Levs
Josh Levs is the author of All in: How Our Work-First Culture Fails Dads, Families, and Businesses–And How We Can Fix It Together.

Amid the celebrations as the Super Bowl came to an end Sunday was a striking sight: Panthers cornerback Josh Norman heaped over, crying. It was natural, real and important. As SportingNews put it, Norman showed “the human side of the Super Bowl with his raw emotions.” He also helped put a nail in the coffin of an old stereotype: the backward idea that “real men” have no feelings.

To see how alive and well this belief still is, just look at Jennifer Siebel Newsom’s new documentary “The Mask You Live In,” which shows the frightening extent to which boys are still being taught this message. Or turn on ABC’s Shark Tank, where, as things got heated and emotional for one entrepreneur, millionaire investor Kevin O’Leary said: “Don’t start crying, be a man!”

The fact that Norman didn’t bottle up his emotions, even at a news conference after the big game, was a powerful reminder that manhood and tears are not mutually exclusive.

But unfortunately, for those stuck in the old mentality, it probably didn’t do much. That’s because for some there’s a nonsensical sports exception: You’re allowed to cry, briefly, if your team loses—or, for that matter, you’re allowed tears of joy if your team wins—but you’re supposed to be stoic in the rest of your life.

With this in mind, I was recently struck by a Facebook feature called “Man Tears.” It’s one of the sets of stickers people send to each other through messaging, part of what the company calls “a new universal language… a succinct, time-efficient and powerful way for people to get their point across.”

One shows a guy lying in bed, eating his (chocolate) heart out. Another shows a man, dressed in a suit, seated with his head hanging low, hand covering his face, with a rose beside him on the floor. A third sticker shows two dudes hugging it out.

Is this a modern way of helping normalize that men having feelings, a “universal” statement that men cry, too, and everyone should be cool with that? Or does it feed the notion that there’s something funny about a guy getting tearful? Fortunately, Facebook told me that its goal is the former. The company “carefully curated a collection for men everywhere, depicting some of those moments that mean a little more,” including a proposal and “saying thank you to your mate,” a spokesperson told me, calling the stickers “a huge success.”

Reading into Facebook stickers may seem ridiculous. After all, other sticker options include Princess Leia wagging a finger, Snoopy gobbling popcorn, and legos lifting weights. Still, those of us working to help guys embrace mental health know that any image of a man crying can send a powerful message. And we know the stakes are high.

Anachronistic views of manhood bring real danger. Many men bury their feelings, convinced that opening up and seeking help are forms of weakness.

Men commit suicide much more often than women. An extensive study showed various ways “hegemonic masculinity,” defined as being “associated with emotional control and power,” contributes to the crisis. It may even help explain why men are more likely to use lethal methods to complete suicide—“failure” to achieve the goal would seem unmasculine, the study said.

To combat this, we all need to project the right messages about guys and feelings. As one British lawmaker put it, society should give men better “emotional education.”

Of course, society has come a long way in accepting that men are human. President Barack Obama cried recently when announcing new steps on gun violence. One historian told CNN it was the “most emotion an American president has ever shown on camera.” Former House Speaker John Boehner cried frequently enough during his tenure that it became expected—so at least the jibbing he received didn’t make him feel the need to hide his emotions.

When actor Hugh Jackman teared up about his father, he was lauded for it. And in movies, great actors don’t shy away from crying scenes. Jezebel compiled video clips, noting that because of the “prevalent notion” that crying “is for girls,” fictional images of men welling up are powerful, making the audience either “cry with them or laugh at them.”

This is not a problem just for men; women who cry are judged in a different way. For example, when Hillary Clinton teared up once eight years ago in New Hampshire during her fight for the Democratic presidential nomination, it set off a preposterous amount of analysis, and even some skepticism over whether her tears were faked. It’s as though to be accepted as political leaders, women have to act like the masculine stereotype that even many of today’s men are moving on from.

When I was growing up, we had the album Free to Be You and Me, with former NFL star Rosey Grier singing: “It’s alright to cry.” Millions of men need to hear, and internalize, that message. 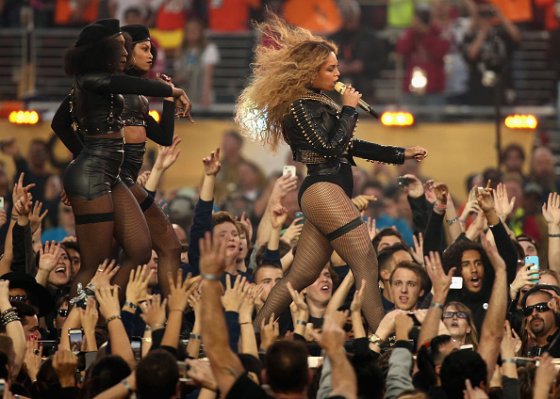 Beyonce's 'Formation' Is Activism for African Americans, Women and LGBTQ People
Next Up: Editor's Pick