Florida Sen. Marco Rubio attempted to reframe Republican thinking about President Obama at Saturday’s debate in a way that could help him.

Through most of the Obama Administration, conservative critics have charged that the Obama is in over his head, to some success. When the Pew Research Center asked for one word to describe the President in 2015, the top two picks were “good” and “incompetent.”

But that framing could hurt Rubio, another first-term Senator known for his eloquence who is running for the White House, so he put forward an alternative Saturday.

“Let’s dispel once and for all with this fiction that Barack Obama doesn’t know what he’s doing,” he argued. “He knows exactly what he’s doing. Barack Obama is undertaking a systematic effort to change this country, to make America more like the rest of the world.”

He then cited the Affordable Care Act health insurance changes, the Dodd-Frank Wall Street reform legislation and the 2009 stimulus as examples.

He later elaborated on the point: “We are not facing a president that doesn’t know what he’s doing. He knows what he is doing. That’s why he’s done the things he’s done.”

But the other Republicans on stage—particularly those who aren’t also first-term Senators—didn’t buy that vision of President Obama.

“Look, let’s be clear,” he said. “Marco Rubio is a gifted, gifted politician, and he may have the skills to be a President of the United States, but we’ve tried it the old way with Barack Obama, with soaring eloquence and we got—we didn’t get a leader we got someone who wants to divide the country up.”

“I think we have a president who, as a president, is totally incompetent, and he doesn’t know what he’s doing,” Trump said. “I think he has no idea what he’s doing. And our country is going to hell. So, I just want to say, we disagree on that. Is that okay?” 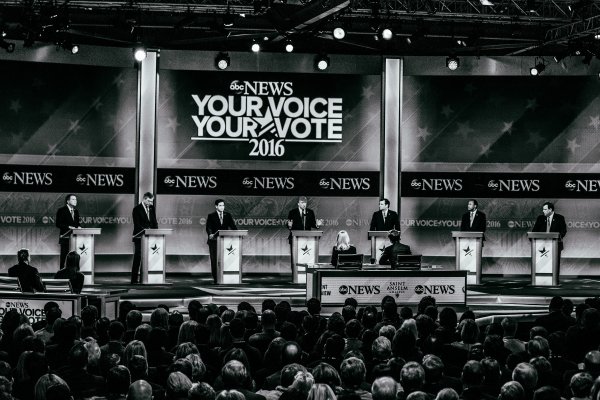 Vote Now: Who Won the Eighth Debate?
Next Up: Editor's Pick