Here's What Social Media Said Ahead of the Republican Debate

Donald Trump was the center of the conversation in the days leading up to Saturday’s Republican presidential debate, according to data from social media.

Trump was the most searched candidate on Google and the most talked about among Twitter users in the days and hours leading up the debate. His share of the conversation Saturday on Twitter (46.7%) more than doubled that of the other candidates.

A similar change in momentum occurred on Google, with Trump leading and Rubio and Bush gaining while the number of searches related to Cruz and Carson dropped.

The most-searched issue across America and in New Hampshire leading up to the debate was gun control. During the debate, Google reported that searches of “Is Ben Carson still running for President?” rose.

The debate in New Hampshire is days before the state’s primary. Social media data, particularly in-state Twitter conversation, was somewhat predictive of the results at the Iowa caucuses. 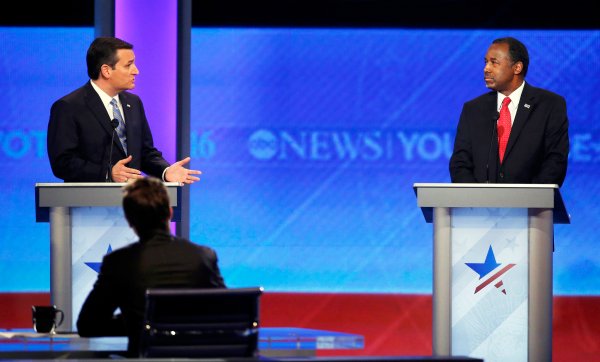 Cruz and Carson Argue Over Iowa Emails at Debate
Next Up: Editor's Pick