Cambridge University scientists released a study stating that it’s impossible for Spider-Man to climb on walls — or, as Stephen Colbert called it, “a Ph.D. thesis on destroying my childhood” from the “Peter Parker Party Poopers.” Naturally, the Late Show host sought additional counsel.

The folks at Stanford sent Colbert a video message saying that it’s possible for Spider-Man to exist in the real world, thanks to a special material that allows a person to climb up glass. It’s just not as spry as Colbert would’ve hoped.

“So, criminals, you’re on notice. Spider-Man is gonna bring you the justice,” Colbert said. “Just stay on the second floor and give him about an hour and 20 minutes.”

In the cinematic world, Tom Holland will be the next to don the Spidey suit, first in Captain America: Civil War this May and followed by his own movie in 2017. 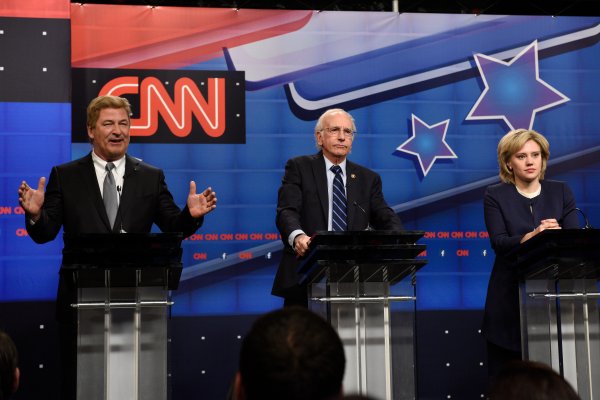 5 Politicians Who Met Their Saturday Night Live Doppelgänger
Next Up: Editor's Pick