Larry David is hosting Saturday Night Live this week, and presidential candidate Bernie Sanders is expected to make a cameo, according to multiple reports. David has impersonated the Vermont senator throughout this season of the show, and even Sanders has embraced the performance.

In a town hall hosted by CNN last week, Sanders was asked if he had his own Larry David imitation. “I am Larry David,” Sanders quipped.

If Sanders appears on the show on Saturday, he’ll join a handful of other politicians who have graciously met their comedic impersonators.

Hillary Clinton appeared on the show in October as a bartender named Val who offered encouragement to the presidential candidate played by Kate McKinnon.

The skit features a “Lean on Me” duet, Donald Trump impersonations and a cameo from Darrell Hammond as a Bill Clinton who flees, “Oh my God, they’re multiplying.”

“They just told me, Donald—other Donald. They just told me—this is very interesting—that now that I’m here, this is actually the best monologue in SNL history. Can you believe that? Pretty great,” Killam says.

“Yeah, that’s pretty good,” the real Trump concedes, before welcoming an identically dressed Hammond onto the stage. “They’re great. They don’t have my talent, my money or especially my good looks, but you know what, they’re not bad.”

While Hammond played Bill Clinton on Saturday Night Live, he also impersonated the former president outside the studio, delivering remarks at the Radio and Television Correspondents Dinner in 1997.

“When I signed that executive order banning cloning research, it was too late to do anything about an experiment or two that had already been started,” Bill Clinton said. “But one of them has come in handy in moments like this. Bill, would you mind?”

Hammond drew laughter as he took the president’s place at the podium to finish the speech, gesturing with his fist and biting his lip.

In an interview with TIME last year, Hammond said the key to a Bill Clinton impersonation was perfecting the “vocal crinkle.”

“There’s no one like him, so on any level you can’t really compare,” Hammond said.

Wearing the same red blazer and American flag pin as the comedian, Palin made a cameo on Saturday Night Live in October 2008, interrupting a press conference and prompting Fey to cede the podium to the real-life governor.

“Now I’m not going to take any of your questions,” Palin said. “But I do want to take this opportunity to say, live from New York, it’s Saturday night.”

In the same episode, the governor bounced along while Amy Poehler performed a Palin-inspired rap about shooting moose, seeing Russia from her porch and running alongside McCain.

Fred Armisen, who impersonated President Barack Obama on Saturday Night Live for years, said he has met the president a couple of times, and he said Malia Obama is apparently a fan of the impression.

“I met him recently, and he was so nice about it and cool,” Armisen said in an interview with the Daily Beast last year. “And then I met him before I started doing the impression of him when he was a guest on SNL for a moment. But he told me recently that Malia would do my impression of him to him. It was really nice.” 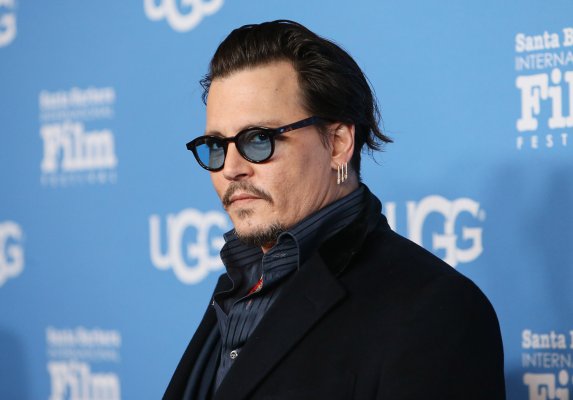 Johnny Depp Admits He Used to Be Mean to Leonardo DiCaprio
Next Up: Editor's Pick