Ash Wednesday is inextricably linked to Easter. After all, it marks the beginning of the Lent penance period that ends on that important Christian holiday. But, even though the Easter story takes place in biblical times, the traditions of Ash Wednesday aren’t quite that old.

“The practice of Ash Wednesday dates back to the 11th Century,” says Lauren F. Winner, a priest and assistant professor at Duke Divinity School. “You see that in the book Daniel in the nine chapter there’s a line about associating fasting with ashes, so ashes are associated with penance, which is the dominant theme of Lent.”

And the most familiar Ash Wednesday observance—the ash crosses worn on the foreheads of many churchgoers—hasn’t always been acknowledged by all branches of Christianity, Winner says. It wasn’t until a few decades ago that the tradition became widespread in the United States.

In the 1970s, the practice matched up with a few wider trends in American religion, including the embrace of once-discarded traditions and the search for ways to connect the physical body to spiritual life. Ash Wednesday was an opportunity for a multi-sensory way of connecting faith to the body, so many American Christians at the time decided to begin wearing that outward physical mark of their spiritual lives. Winner says she thinks its popularity has endured as it offers those celebrating an easy way to prompt conversations about faith.

“We’ve seen the rise of a whole array of bodily practices and this is a very striking one for those who are not necessarily comfortable talking about faith,”she says. “The practice of this once a year is an organic way of drawing their faith into their lives.”

But what is it exactly that’s on the foreheads of those observing the holiday? The ash used for Ash Wednesday is made of palm branches used on the previous Palm Sunday, when Christians carry palms in a nod to the Gospels’ reference to Jesus’ path being covered in palm fronds on the day he entered Jerusalem. Occasionally the ashes are mixed with oil so they stay on congregants’ foreheads for longer.

In modern times, especially as cremation has become more popular in the U.S., many people imbue the ashes with a new level of meaning, Winner says. “[They represent] penance and mortality,” she says, “but there’s also a much stronger and more palpable association if people were just last year scattering ashes of a family member.”

With many religious traditions, the meaning can often be lost over time. But Winner says Ash Wednesday, even as observances evolve, is one exception to that rule.

“It’s very powerful to say those words about ‘you are dust and to dust you shall return,'” she says. “I keep waiting for it to get overly familiar and lose its power but it doesn’t.” 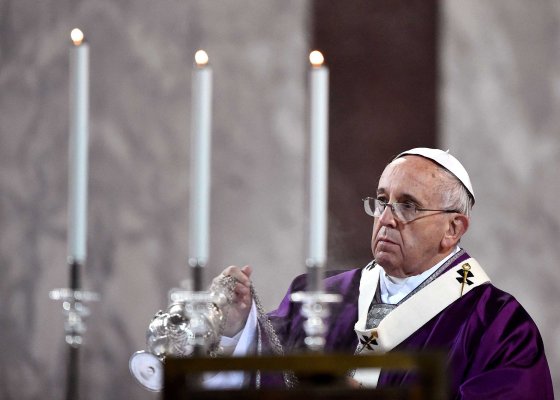 Pope Francis' Guide to Lent: What You Should Give Up This Year
Next Up: Editor's Pick