The Pentagon’s New Family Policies Are an Important Step

U.S. Secretary of Defense Ashton Carter announces new regulations that the military hopes will increase retention of troops that want to have families while preserving readiness during a news conference at the Pentagon in Arlington, Va., on Jan. 28, 2016.
Chip Somodevilla—Getty Images
Ideas
By Brigid Schulte and Peter W. Singer
Brigid Schulte is director of the Better Life Lab at New America and author of Overwhelmed. Peter W. Singer is Strategist at New America and author of multiple books, including Ghost Fleet.

There was historic news out of the Pentagon last week, but it wasn’t about new weapons or an operation against ISIS. Instead it was Secretary of Defense Ash Carter’s plan to remake the US military by placing “a higher priority on work/life balance,” rewiring how it handles the changing ways we think of parenting in the 21st century.

The “Force of the Future” plan aims to remake the increasingly millennial military into a competitive employment alternative to places like Google and Facebook. However, one of the key challenges for that goal has been that retention rates for military women, few in number to begin with (14.8% of enlisted personnel and 17.4% of the officer corps), are 30% lower than for men, with Carter noting that “work and family conflict is one of the primary reasons they report leaving.”

The new policy has a series of changes that would leave officers of just a few generations ago awestruck, if they weren’t already dazed by a military in which women fly fighter planes and attend Ranger school. It will double the paid maternity leave available to women service members to 12 weeks, expand adoption leave, extend daycare hours, provide breastfeeding rooms and pay for egg and sperm freezing. And, reflecting that a new generation of male officers also think differently about their role as parents, it increases paid paternity leave to two weeks.

Carter said the new policy puts the military in the top tier of U.S. institutions. And that’s true, but largely because our bar is so low it scrapes the bottom of the world. The U.S. is the only advanced economy that has no national paid family leave policy, despite the fact that more than 70% of American mothers with children under 18 have jobs now. The result is that only 13% of the U.S. civilian population receive paid leave; among low-wage and part-time workers, it’s 5%.

Under the Family Medical Leave Act, U.S. workers receive 12 weeks of unpaid family leave. But because it applies only to full-time workers who’ve worked at least one year, at companies with 50 or more employees, FMLA doesn’t cover 40% of the workforce, one Department of Labor study found, and one in four employed mothers return to work within two weeks of giving birth. Essentially, our peer in this space is Papua New Guinea, with U.S. parents not only having less benefits than those in nations mocked in recent presidential debates like Sweden, but even less than countries like Iran and Mongolia.

A number of top U.S. employers have been waging a virtual benefits arms race to leap past this, trying to attract young workers who find these offerings unacceptable. Facebook now offers 16 weeks of paid leave, notably available to both men and women, Johnson & Johnson up to 17 weeks for women, eight weeks for men, and the Gates Foundation, one year of paid leave to both men and women employees. But most U.S. corporations offer far less, if anything. So while the military’s new policy outranks them, it still falls short of global norms and best U.S. businesses’ practice.

Beyond where it stacks up, the Pentagon’s next challenge is whether it will work. On one side, critics fear longer leaves may reduce combat readiness at a time of shrinking forces. There is also the question of the estimated $383 million in new costs. With military budgets tight, something else will have to give. The counter-response is that budget debates and readiness rates will be moot if the force can’t recruit and retain top talent.

On the other side, the new policy represents a step back for some already in the force. Last summer, the Navy promised a more generous 18-week paid maternity leave for women marines and sailors. They’ll have to rescind that for women who become pregnant within 30 days of the policy’s enactment.

There is also the issue of fathers. “No exceptions” became the mantra inside the Pentagon for the recent decision to open all roles in the military, including combat roles, to women. But it begs the question now of why treat men and women differently when it comes to other parts of their military work life?

Giving women 12 weeks of paid leave and men two weeks is not just contrary to both the global and top firm norms that the policy is aiming to match, but also only holds onto the outdated idea that family is mostly a woman’s responsibility. A double standard in paid leave risks a work culture where mothers are fearful of being seen as not equally committed to the mission, which can result later in lesser reviews and promotion rates.

This cultural side is hugely important. Indeed, we’ll know this policy is working not just when female officers take maternity leave, and then step back in with no deleterious effect as they advance up the ranks. Instead, the true moment of success will be when, just as Facebook CEO Mark Zuckerberg recently did, top male commanders proudly announce they are taking parental leave and no one bats an eye.

Make no mistake: The consequences of this new policy are huge, both for the military, but also perhaps the American workforce as a whole. Just as in 1948, when the military reset how the nation handled segregation at work, this policy sets a new standard that other government agencies and businesses will be compared with.

It also injects a new kind of political issue into this election season, connecting family leave policy with defense issues, neither of which has been treated with much seriousness so far. Candidates should be pressed for where they stand on the Pentagon’s new plan, as it is a future administration that will have to implement or amend it. And, perhaps most of all, that is why this new plan should be applauded, both for its substantive effort to build a competitive, diverse Force of the Future, but also for how it advances the debate on such crucial issues of the 21st century. 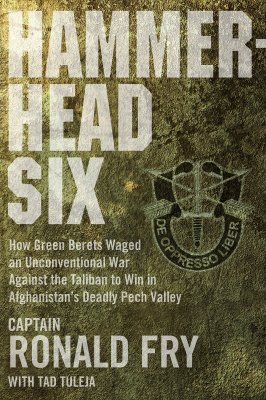 Unconventional Warfare Is the Key to Defeating ISIS
Next Up: Editor's Pick