Here Are the Words People Looked Up During the Democratic Debate

Some viewers had to open a dictionary during Thursday’s Democratic debate.

Dictionary.com provided TIME with a list of the most-searched definitions during the debate between former Secretary of State Hillary Clinton and Vermont Sen. Bernie Sanders.

Here’s what viewers looked up.

Definition: (adjective) of, for, or belonging to a corporation or corporations.

Debate Usage: The word “corporate” was used six times at the debate, helping drive a 466% increase in Dictionary.com users searching for it. At the heart of Sanders main argument is the removal of corporate money out of politics and prosecuting those responsible for the 2008 stock market crash. “The current trade agreements over the last 30 years were written by corporate America, for corporate America, resulted in the loss of millions of decent-paying jobs, 60,000 factories in America lost since 2001, millions of decent-paying jobs; and also a downward spiral, a race to the bottom where employers say, “Hey, you don’t want to take a cut in pay? We’re going to China,” Sanders said.

Definition: (noun) government in which one person has uncontrolled or unlimited authority over others.

Debate Usage: Sanders was asked to discuss an editorial in the Des Moines Register that called for a recount after a narrow victory Clinton victory at the Iowa caucuses—including some sites where a coin flip decided the winner. The word saw a 363% jump in searches. “What happened Monday night at the Democratic caucuses was a debacle, period. Democracy, particularly at the local party level, can be slow, messy and obscure. But the refusal to undergo scrutiny or allow for an appeal reeks of autocracy,” read the Des Moines Register.

Debate Usage: Clinton and Sanders were questioned by moderators on troop removal from Afghanistan. Clinton said the situation on the ground was too delicate to blindly advocate for a removal of forces before a full assessment, “because it’s not just the Taliban. We now are seeing outposts of, you know, fighters claiming to be affiliated with ISIS.”

Debate Usage: A 56% increase in searches for ratification was possibly due to a discussion about trade deals. Sanders said that he did would not support a trade deal as president, while Clinton opted for the right deal at the right time. 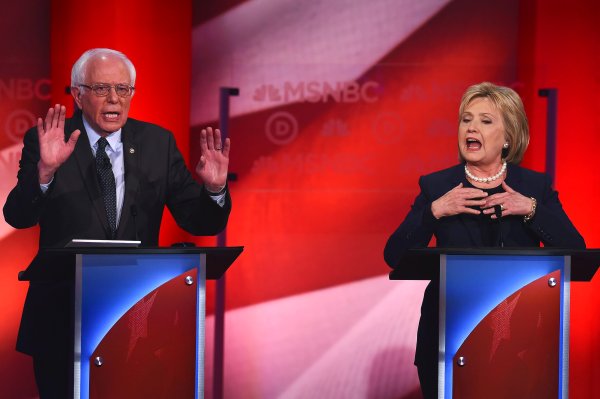 Watch the Best Split-Screen Moments From the Democratic Debate
Next Up: Editor's Pick