Residents inspect damage near a hole in the ground after airstrikes by pro-Syrian government forces in the rebel held Al-Shaar neighborhood of Aleppo, Syria February 4, 2016.
Abdalrhman Ismail—Reuters
By Rishi Iyengar

An intensified offensive by Syria’s government to retake the city of Aleppo, backed by Russian airstrikes, led to a mass exodus of civilians Thursday, with tens of thousands fleeing their homes in an apparent attempt to reach the border with Turkey.

Britain-based monitoring group Syrian Observatory for Human Rights said around 40,000 people were displaced by Thursday’s violence, while Turkish Prime Minister Ahmet Davutoglu claimed that the number was closer to 70,000, the BBC reported.

“Civilians are now besieged from three sides and have just one road to the Turkish territories, Maamoun al-Khateeb, an activist and journalist from nearby Marea village told Agence France-Presse.

Aleppo, which has been divided between Syrian rebel forces and the authoritarian government of President Bashar al-Assad since 2012, has seen some of the worst fighting of the Middle Eastern nation’s five-year-long civil war. Forces loyal to the Assad regime have pushed forward in recent days to capitalize on gains from an aerial bombing campaign by allies Russia, overshadowing the now-stalled peace talks earlier this week.

Russia and Turkey leveled accusations against each other, meanwhile, with the former saying it had reason to believe Turkish forces were preparing for “active actions on the territory of Syria.”

The Turkish government, on the other hand, dismissed Russia’s accusation and defended Turkey’s right to ensure its own security.

“The Russians are trying to hide their crimes in Syria,” a senior official in Davutoglu’s office told Reuters.

Russian airstrikes on Aleppo over the past week have killed at least 21 civilians, the Observatory said, although a local activist speaking on condition of anonymity told Al Jazeera that the casualties number nearly 40. 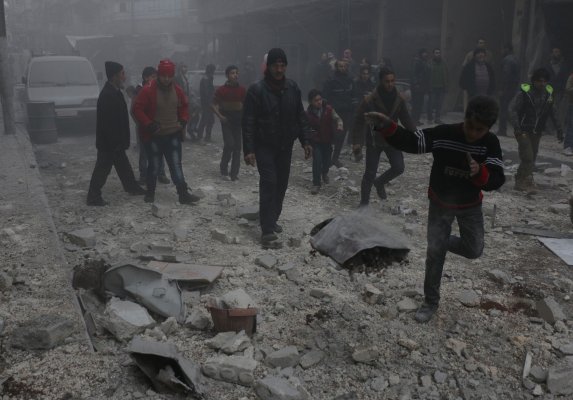