Five video game fans decided to spice up their afternoon by putting down their controllers and heading to the mall for a real-life Mario Kart race through a London shopping center.

In a video shared on Facebook, the group hit the Westfield Shopping Center dressed as Mario, Luigi, Wario, Princess Peach, Yoshi, and Bowser. They strapped on GoPro cameras and set out to race through the mall on mini go-karts. Shoppers looked amused by the stunt, but unsurprisingly, the security guards did not. Luckily the go-karts were fast enough to elude capture and they made it into the elevator and to the parking lot for the win. One member of the prank group told the Standard: “You can’t go wrong with MarioKart. A lot of people were just looking in disbelief and some high fived us.”

But this team of video game loving Brits weren’t the only people to bring Mario Kart onto the streets. In another Mario Kart-inspired adventure, another team of grown-ups sped down one of San Francisco’s infamous hills while dressed like Mario, Luigi, Donkey Kong, and Princess Peach, as part of an ad campaign for a shorts company called Chubbies.

In the video, the group speeds down San Francisco’s Lombard Street, which claims the title of the world’s crookedest street and has undoubtedly inspired many racing fantasies. In the clip, the team races down the track on toddlers cars, crashing frequently thanks to all the banana peels and mushrooms they chuck at each other. Like their video game counterparts, they dust themselves off, race some more, and have more fun than anyone. 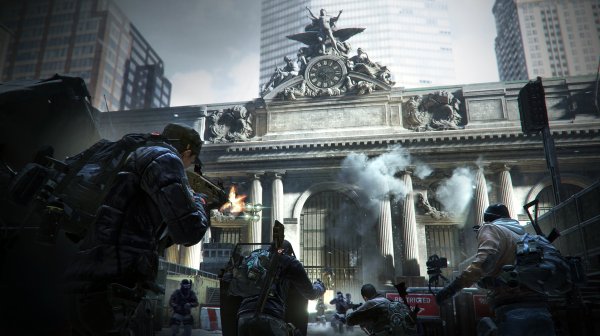 8 Things We Just Learned from Playing The Division
Next Up: Editor's Pick