These 5 Facts Explain the Debate Over Brexit

The so-called Brexit referendum—the coming question of whether Britons will vote to leave the European Union—could not be coming at a worse time for the E.U. Brexit could deal the wobbly European project a devastating blow; but keeping the U.K. in at all costs could be just as dangerous. These five facts explain why avoiding Brexit may be the EU’s most complicated challenge yet.

As he promised British voters he would, U.K. Prime Minister David Cameron hammered out a provisional deal with the E.U. earlier this week on new terms for Britain’s future in the union. At issue is that the U.K., which is not a member of the Euro area and doesn’t use the euro currency, doesn’t want to contribute to future Eurozone bailouts. It wants a veto over E.U. legislation that Britons don’t like and to curb migration by deferring in-work benefits for non-U.K. citizens working in the country. Progress is being made on all these fronts.

For its part, the E.U. wants to keep the U.K. in the E.U. but avoid setting a dangerous precedent that encourages the other 27 governments to demand their own deals.

2. Economic Impact on the U.K.

Campaigning has already begun in the U.K.. “Out” supporters argue that the U.K. is better off economically if it leaves the E.U.; “In” supporters maintain that leaving the Union would seriously undermine the British economy by forcing London to renegotiate its trade and investment relationships with E.U. members. The think tank Open Europe projected last March that a worst-case Brexit scenario would cost the U.K. 2.2 percent of GDP by 2030; best-case scenario is that GDP would rise 1.6 percent over the same period.

Plenty of other think tanks and lobbies have done their own calculations, and each group cites whatever numbers bolster its argument. But there’s no precedent for a country leaving the E.U., so no one really knows what the morning after—and the year after—will look like. Britons are like one half of a bad marriage, pondering a divorce. Are they unhappy enough with the way things are to gamble on the unknown? Accept those ills they have? Or fly to others they know not of?

3. Economic Impact on the E.U.

Calculating the economic costs of Brexit on the E.U. is a bit easier. The U.K. currently contributes 5.8 percent of the E.U.’s operating budget, second only to Germany, and accounts for one-third of all foreign direct investment into the E.U. If the E.U. loses the U.K., it loses 15 percent of its GDP. Then there are the demographic concerns. Nearly 2 million people from other E.U. countries are currently working in the U.K. It’s still not clear what happens to them if the U.K. decides to leave. The problem goes both ways—1.26 million U.K. citizens are currently spread throughout the rest of the E.U. So there are plenty of reasons why the E.U. wants to keep the U.K. in the fold. But Brussels also knows that bending too much may bring its own “sea of troubles.”

Poland is the only country to have publicly voiced concern over the provisional draft this week. Some 700,000 Poles now live in the U.K.—the highest share of foreign citizens living in the country—and Warsaw is worried that suspending in-work benefits to non-U.K. workers will hurt Poland disproportionately. Poland will meet with fellow Eastern European countries ahead of an E.U. summit later this month to try to coordinate responses to any Brexit proposals.

There are other political concerns at play, as well. The U.K. has traditionally served as a counterbalance to France in policy debates, with Germany playing the role of conciliatory broker. If the U.K. leaves, Berlin will sometimes have to take on a more directly adversarial role toward Paris. If you thought frustrations with Germany were running high over the refugee crisis, just wait.

So Brussels must be careful. If it gives the U.K. too good a deal, it risks creating an uproar among Eastern European countries. But it must give enough to help Cameron win his referendum and avoid Brexit, or else risk upending the already fragile political dynamics of the E.U. And it needs to make sure these negotiations don’t set a dangerous precedent for others to try the same.

Read More: Saudi Arabia Will Be the Big Loser From Oil Prices

And what about the British public? Right after the U.K. held parliamentary elections in May, an ORB poll found that 55 percent of Britons wanted to stay in the E.U., while 45 percent would opt to leave. Those numbers remained relatively stable throughout the summer. But as the refugee crisis reached fever pitch in October, E.U. support inside the U.K. began to dip; 53 percent said they favored staying while 47 percent said they wanted out. Then came the terrorist attacks on Paris. In their wake, 52 percent of Britons said they wanted to leave the E.U. while 48 percent said they wanted to stay. An ORB poll last month showed that those numbers had flipped again, with 52 percent opting to stay and 48 percent in favor of Brexit.

Clearly, Britons haven’t yet made up their minds. Cameron has signaled that he wants to hold the referendum by June. It remains to be seen if that’s politically possible. But the longer he waits, the greater the risk for Cameron that some unforeseen event will push Britain into undiscovered country. 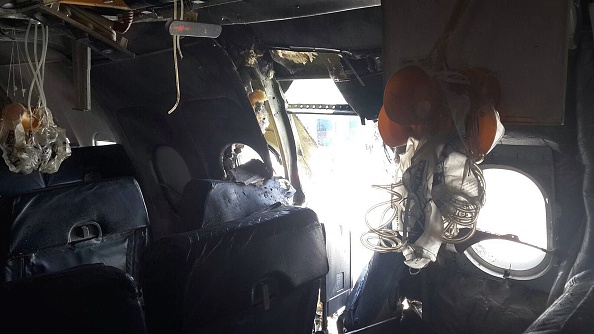 Man Sucked from Somali Jet May Have Been Suicide Bomber
Next Up: Editor's Pick