Were you worried about what would happen when people Googled Full Frontal?

Honestly, it did not occur to me that people would sexualize it. I don’t know why my head is in the sand. The world has a dirty mind. Not me.

Why did you decide not to sit behind a desk?

It just feels so passive, and I get bored with it. I want this show to feel like an attack, or at least more active, especially because I’ll be doing a lot of fieldwork.

Some people accused The Daily Show of editing field interviews to make people look bad. Was that the case?

The best interview subjects are speaking authentically about the things that they’re most passionate about. I feel I never took anyone’s words out of context. Sometimes when people’s answers get played back to them, they just don’t like what they see.

Are you going to strive to be impartial on Full Frontal?

We’ll try to be equitable. But my passions do go down a certain thread, and I plan to follow them. I think it will be less impartial than The Daily Show and more driven by … anger! I’m kidding. Not anger. But hopefully it will be passionate.

What have you learned from watching other alumni like Stephen Colbert and John Oliver launch their post–Daily Show careers?

I actually don’t watch other people’s shows. I don’t want to cross streams with them or to take on their style by osmosis. And I don’t want to go, “I don’t know if I can do that.”

How did you put together one of the most diverse writers’ rooms in TV?

We had a blind submission process, and we actively recruited. Often what happens is you have a blind application process but 90% of the submissions are still from white guys who worked on other late-night shows. So we really worked hard to reach into different communities and call people we admired. We also provided instructions on how to structure a script, so if you’d never written for TV, your blind submission would look as good as someone who went to Harvard and worked on Letterman for 10 years.

Diversity is a problem for the whole industry, as the Oscar nominations demonstrate. How do you change that?

The Oscars are so lily white this year. It’s a really solvable problem. If you have the power to greenlight something, just greenlight things made by a more diverse range of people. As long as I’m here, I would like to do my business differently, because I can.

As a comedian, are you happy with the current state of political affairs?

It’s still hard on my soul for me to take Donald Trump seriously. I don’t think I’ll ever get used to it. As much as I’m embracing the circus atmosphere because it will be entertaining, as a voter I would still hope that we get an actual good person in there.

You worked with your husband Jason Jones on The Daily Show and now on Full Frontal. How do you manage a working relationship with your spouse?

We met each other working in a children’s-theater troupe and have continued to work together for almost 20 years. He’s very good at pushing comedy beyond my comfort zone, and I’m good at reining him in. And we just drop it when we go home. Having children helps because they do not care about our work at all.

Your bus ads say, “Watch or you’re sexist.” How do you highlight your position without making the show all about that?

I love our posters. Our runner-up was “Comedy with wings,” which was a really close second. I care about women’s stories. I think that people can handle it—even men. 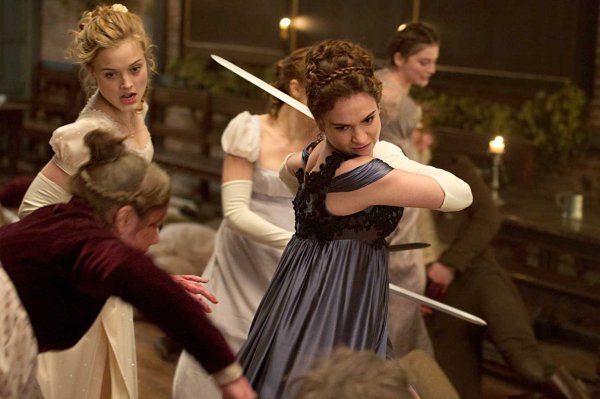 Review: Fighting the Undead in Pride and Prejudice and Zombies
Next Up: Editor's Pick