In Our Overdocumented Lives, Letting Go Has Gotten a Lot Harder

When my younger daughter grows up, she’ll have her own giant digital archive–photos of every friend she ever had, every comment on what she ate and wore and worried about from fifth grade on. All her relationships will have their own real-time transcript. And while teenagers may be the most avid self-documenters, it’s true for all of us to varying degrees. In the past 10 years, we’ve learned to measure out our lives not in coffee spoons but in tens of thousands of images and words, a universe that grows in both reach and volume with every new device.

Most of us type more than we talk these days. And the more we live in this parallel digital world, the blurrier the line gets between present and past. Because when nothing is lost, nothing is past. Even if you want it to be. Unbidden, Facebook’s Memories function has started posting photos of a meal you ate seven years ago with people who may not even be alive anymore. And those images sit in your feed along with photos of the mimosa brunch you’re having on vacation right this very second. Time is no longer a river; it’s a looping series of digital paths.

It’s tempting to wander down those pathways, to dredge up an ancient text to win an argument, to pore over a long-forgotten exchange to pinpoint exactly when things crossed over from flirting to love or from love to bitterness. (Surely there’s an app that will analyze language of affection and map when certain words start to dwindle or increase.)For those of us who came of age before we became our own court stenographers, this is unsettling. All that evidence of what we really said messes with the version of ourselves we’ve created. But for our children, having constant, immediate access to every memory is normal. They have grown up as time shifters, each living in his or her own version of the moment.

A few years ago, my daughter, who was just in elementary school, fell in love with the band Queen. She found it online, and for months I’d come home to “We Are the Champions” blasting, a song that was played at my junior high basketball games. Then early one morning, she opened my bedroom door, distraught. “Mom, did you know that Freddie Mercury is … dead?” She’d gone deep into YouTube and stumbled on an old video of the lead singer in his British garden, thin, without his glittering costumes, not long before he died of AIDS in 1991. There was my 21st century girl, mourning a 20th century tragedy as if it had just happened.

Now she’s obsessed with streaming TV shows that I watched while pregnant with her. Last year it was The Office–a series that reminds me of 2006 and the financial crash, bringing her to kindergarten and my impending divorce. For her, it’s all new. And when she’s 35, she’ll be able to watch it whenever she wants. In fact, she’ll be able to go back to visit her life in 2016 anytime she wants.

If you, like my family, are of a nostalgic and sometimes emotionally litigious nature, this vast digital archive can be the devil’s playground. There are all the old connections, detailed transcripts of conversations with people you will always miss. Parents long gone, a child now grown, all the places you’ve been that are impossible to revisit. All of it stored in that growing digital cloud of data, the wiki of us. Human beings are built to bond and to resist separation, to grieve the end of things. It’s an ache that ebbs and flows, stirred up by reminders you can’t predict. But now the reminders are always on tap and dispensed regularly.

And those uncountable images are just the start. Last year researchers in France came up with a way to re-create a loved one’s scent. Using a piece of clothing, they can isolate 100 molecules that are unique to a person and turn them into a bottle of perfume. There may be no more visceral way to evoke memories. Smell is the only sense that connects directly to the part of our brain where we store memories.

When I first heard about this, it was creepy and yet … tempting. My mom died five years ago, and until recently her favorite jacket still smelled like her. Now it smells like my closet. Part of me wants to have that part of her back, to stave off time. Or maybe if I had to choose, I’d bottle the scent of my daughters as babies, something that would remind me of their soft, sweet selves when their teenage selves drive me bats.

But here’s the problem with ubiquitous remembrances, whether in a bottle or in a device. You can still wear them out. Even with all our data, memories are fragile and easily distorted. Look at a photo too often, read the same passage over and over again, immerse yourself in the scent of a loved one constantly and it loses potency. It becomes a memory of remembering.

That’s one advantage of our imperfect brains. We can’t help but stumble ahead. And it’s possible that you look forward to having grandchildren precisely because you miss the way your own kids smelled when they were just out of the bath. 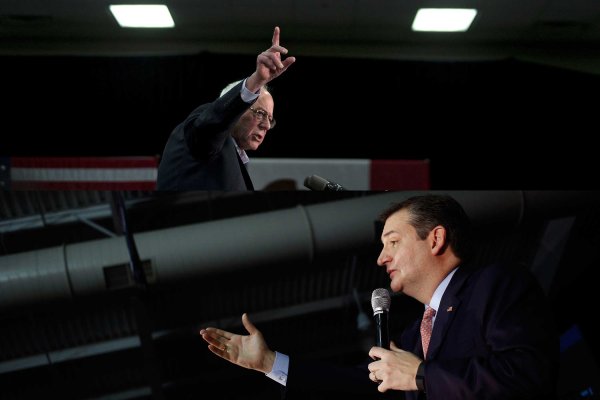 How Ted Cruz, Bernie Sanders and Others Play Gender Cards
Next Up: Editor's Pick