Missing Dissident Journalist Who Fled to Thailand Is Back in China, His Wife Says

Chinese journalist Li Xin, who went missing from Thailand nearly two weeks ago, has resurfaced in China saying he is being held by the police, his wife said Wednesday, making him the latest in a series of individuals suspected to have been abducted by the Chinese government.

“He said that he had returned to China voluntarily and was under investigation, but he didn’t say where he was,” Li’s wife He Fangmei told the New York Times via telephone from their home in the country’s central province of Henan.

“His tone was like they’d given him guidance,” she added. “I knew someone at his side was telling him what to say, and he said, ‘Don’t get involved. Don’t ask so much. I’m doing fine.’”

The 10-minute phone call was the first contact He had with her husband since he disappeared near Thailand’s border with Laos in early January. He had reportedly traveled to the Southeast Asian nation following failed attempts to seek asylum in the U.S. from India, where he initially fled.

Read Next: Inside the Secretive and Fearful World of the Chinese Exile Community in Thailand

While in the Indian capital city New Delhi, Li, an online editor and staunch pro-democracy advocate at China’s Southern Metropolis Daily tabloid, had revealed a list of alleged topics and sources that China banned its journalists from covering. He also alleged that Chinese government agents had forced him to spy on his journalist peers and other activists.

Li is the fourth dissident to resurface in China after seeking refuge in Thailand within the past four months, as the Chinese government’s rapidly expanding crackdown on nonconformist voices continues to extend beyond its own borders and the Thai military junta government appears ever ready to cooperate. Two such prominent dissidents, Jiang Yefei and Dong Guangping, were deported in November by Thailand’s authoritarian regime for alleged “immigration violations,” despite being officially recognized as refugees by the U.N. Hong Kong bookseller Gui Minhai, co-owner of a publishing company known for its salacious books on Chinese Communist Party officials, disappeared from his apartment in the Thai beach resort town of Pattaya in October.

Read Next: Hong Kong’s Existential Anxieties Continue to Mount in the Face of China’s Encroachment

Gui, a Swedish national, suddenly appeared on Chinese state television last month, nearly in tears as he confessed, many suspect under coercion, to a drunk-driving crime he purportedly committed over a decade ago. Three of his colleagues from controversial publishing house Mighty Current Media are still missing, while a fourth — Lee Bo, believed to have been kidnapped from the semiautonomous territory Hong Kong — is being detained in southeastern China.

The authoritarian Asian power’s dragnet has not been restricted to the publishing sector or even its own countrymen, with instances in recent weeks including the detention of a prominent Chinese pastor, the dubious confession and subsequent deportation of a Swedish aid worker and the charging of a Canadian man with espionage.

As for the journalist Li, many questions still remain despite the revelation that he is in China, with Thai authorities telling the Times on Wednesday that there is no record of him having left the country.

His wife, meanwhile, remains unconvinced that he returned to China of his own volition.

“I know this is them [the Chinese government] speaking,” she said in a tearful conversation with CNN. “It completely contradicts what Li Xin would like to say.” 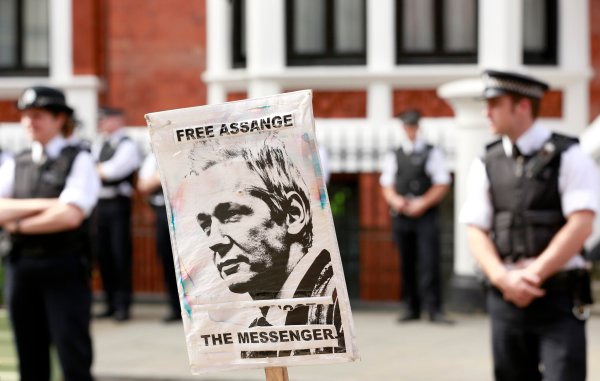 Julian Assange To Surrender If U.N. Rules Against Him
Next Up: Editor's Pick