Ted Cruz is campaigning as though his win in Iowa came with a free a coat of Teflon.

The Texas Senator Wednesday simply brushed off suggestion that he fire campaign aides for telling Iowans that Ben Carson was ending his White House bid just hours before the caucuses began.

He said Donald Trump’s claim that Cruz “stole” the Iowa caucuses was just wrong. That Sarah Palin can buzz off. And that Marco Rubio’s criticism doesn’t count since his “views are virtually indistinguishable from Hillary Clinton’s.”

It’s small wonder most of Cruz’s colleagues in the Senate despise him. But it’s also why the collegiate debating champ has proved a more durable candidate than they expected. He isn’t really interested in debating them or giving any ground on their criticism. Attacks don’t stick if they can’t hurt.

“He can do that if he wants,” Cruz said of Trump’s attacks. Their bromance has long since faded. “The people of New Hampshire deserve more.” There’s a reason he was a winning Supreme Court lawyer before he gave into the bug to run for office.

Cruz has long had tough words for his rivals and critics alike, but he is now incredibly comfortable taking his shots. He had to calibrate in Iowa, where Midwest gentility demanded he smile and seem the model of Christian manners. In New Hampshire, voters have a greater appetite for the pique, and next-up South Carolina rewards the broadest swings.

The 2016 campaign is still in its infancy, but it’s clear Cruz is in his adolescence. His laugh lines are often at rivals’ expenses, and his talent at rendering his opponents unacceptable matched only by Trump. Where Barack Obama was a once-a-generation figure who inspired his fans, Cruz might be a similar talent who can make his legions sneer.

It might work. Cruz is rumbling through New Hampshire with a swagger that befits a front-runner. He is packing churches, school auditoriums and small businesses. Rivals covet these crowds, who, at least anecdotally, are committed Cruz supporters in a state where many voters remain undecided.

Staffers and volunteers are working double-shifts at its campaign offices, starting before dawn with vats of Dunkin Donuts and ending the day well past dark with pizza and soda. Cruz proved in Iowa that the nuts-and-bolts of campaigns still matter over bombast on Twitter.

For his part, Cruz is keeping up steady messages that paint peers as insufficiently conservatives and himself the only trustworthy Republican. Crowds after his events swarm him, leave even more determined to help him win.

“Ted Cruz’s win (in Iowa) gives me hope that Donald Trump is not invincible,” said Stephen D’Onofrio, a 46-year-old engineer who attended a Cruz rally on Tuesday in Windham, N.H. “He’s not unstoppable. He can be taken down. Once you see the stumble, you look for the fall.”

Cruz dismisses most criticism as politically motivated. For instance, on Wednesday he at first tried to brush past criticism that his team passed along news that Carson was heading home to Florida after Iowa. Cruz backers implied that Carson was ending his campaign and caucusing for Carson was a wasted vote; Carson said he was heading home to get clean clothes. Days before, he faced criticism from the Iowa Secretary of State for misrepresenting their voting records.

Cruz was asked about the Carson imbroglio at the start of a town hall in Nashua. He largely bypassed it and left it unaddressed the first time. An audience member came back to it, still wanting answers.

“It’s very simple to explain,” Cruz said. His team simply passed forward an accurate CNN story about Carson—“someone I like and respect, he’s a man of honor and integrity”—going home. “CNN got it correct. Miracles happen,” he said, deploying the media as a foil to his conservative crowds.

Cruz said he would not be bullied into firing staffers to silence his media critics. “I don’t make a habit of scapegoating members of our political team for political purposes,” he said.

Critics, 0. Cruz, 1. He kept building on that throughout his final stop of Wednesday.

The sharp-elbowed lawyer also mocked Trump’s claim that Cruz “illegally” stole a win in Iowa on Monday night. “Donald told us every day for a year that he was going to win Iowa big, win it yuuuuuge,” Cruz said. Trump came in second and was within a few votes of falling behind Rubio. “I know that sometimes this campaign seems like a reality TV show, but if they want to be president, they need to confront reality.”

Trump did not take the loss well, and Cruz used that reaction to stoke fears in New Hampshire, where residents treasure their century-old primary.

Palin, the GOP’s 2008 vice presidential campaign and a Trump supporter, also has been critical of Cruz’s methods that helped him break turnout records and win the most support ever in Iowa’s caucuses.

“It seems like you spend too much time with Donald Trump, strange things happen to people,” Cruz said of the woman who helped him win his Senate seat in Texas.

And Marco Rubio? “Marco’s views are virtually indistinguishable from Hillary Clinton’s.” If the 2016 campaign is going to be about immigration policy, then the GOP nominee should be different from the Democratic frontrunner, he argued. He said Rubio would be this cycle’s Mitt Romney—a fine man who rendered the Republicans incapable of a win because he agreed with the Democrats on a big issue—before pivoting to yet another attack. “Both Marco Rubio and Hillary want to grant amnesty and make citizens of 12 million people who are here illegally. You know who also has that view? Donald Trump.”

Indeed, it is Trump who gets the biggest needle from Cruz. “I wake up every day to read a different insult from Donald. Look, they’re always amusing. Look, if you’re going to get insulted by someone,” Cruz said trailing off. “He can do that if he wants.”

Cruz is just going to brush him off. It might be good manners. It might be an even bigger way of making Trump lose his temper. And that, for sure, is smart politics. 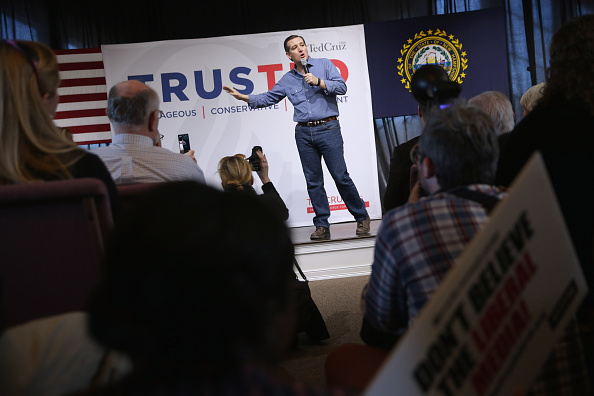