Photograph by James Nachtwey for TIME
By TIME Staff

TIME political columnist Joe Klein sat down with Hillary Clinton on Tuesday in Hampton, N.H., to about her campaign and the state of the presidential race. To read more about their interview, see the cover story for the Feb. 18 issue of TIME. The following is an edited and condensed transcript of their conversation.

KLEIN: I was watching you in Iowa last week and you were working so hard and by the way, really well. And then I saw what happened last night and it occurred to me that it’s never easy for you in politics.

SECRETARY HILLARY CLINTON: You know what, I think that it’s always hard but there are a lot of issues and maybe even some obstacles that I’ve got to get over in order to make my case and have people listen. I felt really good as we were moving through those last couple of weeks before the caucus because it’s a very strange election, Joe. You’ve been covering them for a long time.

This has a lot of psychodynamics as well as economic pressures and there’s just an incredible sense of frustration on all sides of the electorate and for me, I could feel my campaign moving forward, picking up support, and I had to do every single bit of it to win.

KLEIN: You mentioned issues and obstacles. What obstacles?

CLINTON: Well, I think that there are lots of punditry and analysis about what is really driving voter interest, voter turnout in this election. And the grand statement, the insult, the scapegoating, the anger — all of that has constituencies, and I’m somebody who likes to make progress, get things done, get real results in people’s lives.

Read more: Here’s Hillary Clinton’s Advice to Her Younger Self

It is the classic Mario Cuomo distinction between campaigning in poetry, governing in prose.

KLEIN: I was there when he said it.

CLINTON: You were there. I remember you were. And I don’t want to overpromise. I want people — we have to knit this democracy back together. I feel that democracy right now in the world, writ large, is a fragile organism and leaders, both government leaders, political leaders, economic leaders, have to understand that we’ve got … to do, and we sure don’t need to overpromise or scapegoat or look for each solutions at the cost of engaging voters in a really thoughtful discussion about how we’re going to get problems solved, how we’re going to move forward, and that’s what I’m going to keep hitting on.

KLEIN: I love the ad of you and your lifetime support for children’s issues and seeing you with those pictures going all the way back. If you were to talk to that young woman in that photograph about what you know now and what the difference is, what would you say to her?

CLINTON: I’d say don’t ever lose your idealism. Stay true to your values about what you think needs to happen in our country to give more people, particularly kids, the chance to live up to their God-given potential. Keep working toward that, but also don’t just hang on to the idealism at the expense of actually producing results that will improve people’s lives….You could stay outside the political process and be an advocate and set the goals, and there’s a really worthy role for that and an American historical experience that supports that.

Read more: Hillary Clinton on Running and Governing as a Woman

KLEIN: And how would you tell her — what argument would you make for her to vote for you now as opposed to Bernie?

CLINTON: I’d say look at what a candidate has actually accomplished. There’s a role for rhetoric, there’s a role for political ideology. But the best way you can tell what a President can and will do is by looking at what that person brings to his or her candidacy…I know what it’s like to be knocked down and how you dust yourself off and you get back up and you keep fighting for what you believe in. But you do it within the process so that you can actually try to get results for people, so that you can point to our political system working. And I think that that’s what we need more of right now; not less.

KLEIN: One of the surprising things to me seeing you last week for the first time in awhile actually on the stump was how passionate you’ve gotten. Was there a moment when that kicked in or did it just evolve or — I mean you used to be really serious.

CLINTON: Well, I still am to be fair. But you know I also recognize that I had to do a lot of spadework. I don’t think I would have won in Iowa if I hadn’t spent a lot of time in small groups answering lots of questions, listening to people… At many important points in politics, it’s the stories that drive your passion. It’s the people you’ve met along the way. It’s their worries, it’s their hopes, it’s their troubles that get you up in the morning. And look, I want to know the big picture. I study it, I try to learn it because I think it’s important if you’re going to be proposing how we get to universal healthcare coverage and get prescription drug costs down and all the rest of it, you’ve got to know the way the system is. You’ve got to know how to take it on. And you’ve got to know how to produce results. But what gets me up in the morning is meeting the woman in Clinton, Iowa, whose drugs have gone up from $10 or 20 a shot to $14,000.

Read more: How Hillary Clinton Is Trying to Avoid Being ‘Shrill’

It is an amazing story and that’s what fuels me because then you draw the connection. You pick up a newspaper and you say, okay, there’s a company called Valeant Pharmaceuticals formed by a bunch of hedge fund guys to go out and buy small drug companies, get a hold of old drugs. They’re not putting any new research money in, they’re not trying to find new uses for it. They just want to jack up the prices as high as they can to just make as much money as quickly as possible.

Meeting the woman, knowing what the market is doing, trying to figure out how we’re going to stop predatory pricing — that’s all part of how I think about it and because I’ve spent months in New Hampshire and in Iowa and other places, meeting people with these stories, it does get me agitated. It gets me outraged because I have a picture of somebody in my head who is being taken advantage of, and I have a much broader critique of the power of economic forces than Sen. Sanders does because being denied the drugs that keep you alive is the most dramatic thing that can happen to a person.

KLEIN: On the Friday before the caucus, the story comes out about the 22 emails. How are you going to get past this?

CLINTON: The same way I did Benghazi, by actually stating the facts over and over and over again, despite the Republicans’ best efforts to try to confuse the electorate, to try to create an issue where there was none and then testify for 11 hours and there will be some who will continue to raise it, but it has certainly gotten absorbed through the body politic. This will as well.

Read more: Inside the Clinton Plan to Beat Bernie Sanders

KLEIN: I had a colleague way back in the dawn of history who said “the big difference between Bill and Hillary Clinton is that he’s a Baptist and she’s a Methodist.” And in the last couple of weeks, really for the first time, I think you’ve been talking about your faith.

CLINTON: My faith is a central pillar of who I am and I’m grateful for it.

KLEIN: How do you address the increasing fragmentation of the country? Can move that from your personal religious experience to a broader one?

CLINTON: I do think there is an underlying spiritual dimension to the challenge that we face to keep our country together in a very literal sense so that we’re not flying out of a centrifuge, the center cannot hold.

There are so many pressures on people today and a lot of them are divisive pressures. “The Big Sort,” that whole theory about how we want to hang out with people already like us. We want to watch news we already agree with. We want to form opinions that can be validated by public figures that we already think are on our side. And Robert Putnam’s work on the disintegration of community, and particularly on the impact that it has on kids, is very influential in my mind….We need to have a conversation about it. We need not to shy away from it. We need to fight through what will certainly be ridiculed. Dismissiveness, rejection.

KLEIN: Why? What are they going to ridicule and dismiss?

CLINTON: My husband and I talk about this a lot because the stark statistics about lower-educated white middle class people in our country having a deteriorating life span is distressing.

Read more: Clinton Explains How Christianity Has Guided Her Politics

The drug epidemic that is just gripping so many people, particularly young people so that overdoses now exceed car crashes as a source of fatality. The gun violence in communities, particularly African American communities. You go down the list, and you look at what is not only killing people but breaking hearts and disintegrating communities, in coal country, Indian country, inner city, poor rural — it’s because we are not seeing each other. We are not listening to each other. We are not understanding we are all part of the American community and at its core is this concept of citizenship.

And everybody should be concerned about that. 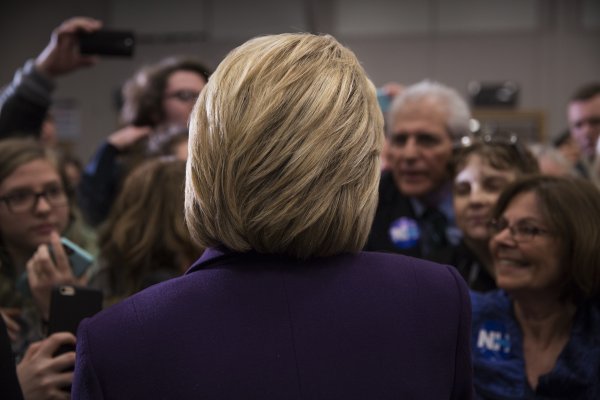 Hillary on the Race, Her Rivals, and Angry Voters
Next Up: Editor's Pick