Four Sigmatic
By Olivia B. Waxman

For more than 2,000 years people have believed that certain mushrooms have healing properties—particularly one known as lingzhi in China and reishi in Japan. Grown on logs, reishi can be red or dark-colored with a shiny top, hence its Latin name Ganoderma lucidum, which means bright. If you tap on it, it sounds like a door knock, says Iris Benzie, Chair Professor of Biomedical Science in the Department of Health Technology & Informatics at Hong Kong Polytechnic University, who has been studying reishi for 15 years. It’s not usually eaten whole, mind you. More often, it’s ground-up and sold in capsules or a powder that can be stirred into beverages tea or into soup.

One company that has received some recent press for trying to cultivate the use of reishi in the West is Four Sigmatic, which sells a reishi hot cocoa mix (a box of 10 packets costs $20) and a reishi elixir, a powder that also contains various herbs (a box of 20 packets for $35). “Indigenous cultures would use reishi to make a tea or soup, but many people don’t drink soup on daily basis, and tea didn’t catch on,” says Tero Isokauppila, the company’s CEO. Four Sigmatic makes the products by drying out the fungi, which they get from southeast China, boiling them for roughly 12-24 hours in water and alcohol and then putting the mixture into a “spray-drier that uses pressurized hot air” to remove the liquids. What’s left is a powder supposedly concentrated with the two main components of reishi: polysaccharides and triterpenes.

These two ingredients are what give reishi its reputation for being a “sacred fungus” and the “mushroom of immortality.” “Polysaccharides are believed to stimulate white cells and the immune system and possibly be involved in preventing new blood vessel growth, which has an anticancer effect because cancer cells growing rapidly need a good blood supply and encourage blood vessel growth to nourish them,” says the reishi researcher Benzie. “Triterpenes are believed to be ingredients that might have something to do with lowering cholesterol.”

Ancient Chinese textbooks said reishi would help people live longer, “enhancing vital energy,” while the 2000 edition of The State Pharmacopoeia of the People’s Republic of China once recommended it for palpitations, insomnia, and to “ease the mind.”

A brochure for the Four Sigmatic elixir echoes the general wellbeing and heart health claims, saying “reishi reduces the possibility of heart disease” by lowering the LDL cholesterol levels and blood pressure. The cocoa and elixir are also touted as a sleep aid: “Reishi is an adaptogen that helps the body in adapting to challenging conditions. It directs people to relax when they are under too much stress.” Isokauppila says reishi also “protects and cleanses” the liver and helps the organ break down stress hormones, so “ideally it’s eaten in afternoon or evening because a lot of liver detox happens at night.” The company also says the mushroom’s antihistaminic properties “help prevent” spring allergies.

“We don’t positively know that the polysaccharides and triterpenes do anything,” says Benzie. Even though many consider reishi the most-researched of so-called medicinal mushrooms, Russell Paterson, who co-authored a 2015 review of the existing research, says “there’s a big gap between the popular myth of the mushroom and the actual scientific research that needs to be done.”

That said, most of its purported medicinal benefits have been documented in rodent studies and in test tubes, which is promising but doesn’t mean these things would necessarily happen in humans. Experts note that when it comes to humans, most of what’s available is a handful of case reports. For instance, in a 2011 Journal of Clinical Oncology paper, doctors observed that the tumors in three liver cancer patients, who happened to be consuming reishi regularly, shrank.

As for the word “adaptogen,” that’s a catch-all phrase that means “anything helps your body,” says Simon Yeung, a doctor of pharmacy who manages the About Herbs website at Memorial Sloan Kettering Cancer Center. Benzie adds the calm people might feel after drinking reishi hot cocoa could just be because “if you’re having the hot chocolate, you tend to be in an environment where you’re sitting and relaxing, so the hot drink will make you feel more relaxed.”

One key limitation to the overall body of research: There’s no standardized way of preparing reishi. Not all products extract the main ingredients or grow the mushroom in the same way, so items on the market may vary in the amount of polysaccharides and triterpenes that they contain, depending both on how old the mushroom is and what part of the mushroom is being used.

Bitter, thanks to the triterpenes. “Triterpenes in plants are the things that stop animals from eating them,” Benzie says. Yeung says reishi tastes like “tree bark.”

“Reishi tastes really bad,” admits Isokauppila, who recommends adding honey or almond milk to the cocoa if it’s not palatable enough, or putting the elixir into a smoothie. With the Four Sigmatic products, we found the elixir is the most bitter, while cinnamon and chocolate hot cocoa mask the bitterness better.

Yeung, who gets questions about reishi a lot from cancer patients, tells them not to consume these mushroom products while undergoing chemotherapy because doctors cannot be sure it won’t affect how chemo works on cancer cells. Yeung also says that people on diabetic medications should take caution because they “may lower their blood sugar level,” which could cause a “cold and shivering” feeling. Four Sigmatic has a similar disclaimer in its brochures. 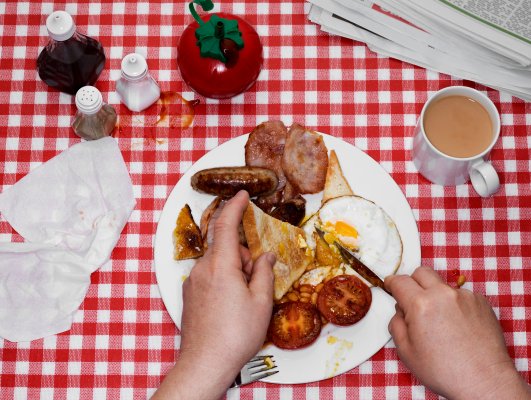 3 Ways Your Breakfast Can Help You Lose Weight
Next Up: Editor's Pick