Hillary Clinton roared into New Hampshire Tuesday morning claiming victory in Iowa, albeit it by the thinnest of margins, and emphasizing the most economic populist notes of her stump speech.

“The key issue has to be the economy, that is something that we Democrats agree upon,” Clinton told an enthusiastic audience at a school gymnasium in Nashua, New Hampshire. The crowd was larger than anticipated and more than 100 people had to be turned away. “New Hampshire is going to have to decide who can go toe-to-toe with the Republicans.”

The night before in her victory speech in Des Moines, Clinton had declared herself a proud progressive—signs that she is moving to the left in order to better counter Sanders’ stronger than expected challenge for the Democratic nomination. Clinton comes into New Hampshire trailing the self-proclaimed democratic socialist Vermont Senator by 18 percentage points, according to an average of New Hampshire polls done by RealClearPolitics.

Read More: Sanders Suggests Clinton Is Not a True Progressive

But New Hampshire has been kind to the Clintons in the past. Bill’s better-than-expected second place showing here in 1992 breathed new life into his faltering presidential bid. As did Hillary Clinton’s surprise win here in 2008 over Barack Obama. Both dubbed themselves the “comeback kids” thanks to the support of New Hampshire voters. And this time around they are hoping for a similar last-minute surge of support.

Clinton had been hoping for a larger Iowa victory, one that would have given her the kind of momentum Massachusetts Sen. John Kerry had coming out of Iowa in 2004. Kerry edged out another Vermont rebel, former Gov. Howard Dean, in New Hampshire after his surprise Iowa win. But both Kerry and Dean came from New England, while Clinton does not. And her Iowa win was much less definitive than Kerry’s.

One thing that did help Hillary to victory here in 2008 was the female vote. After losing Iowa, Clinton teared up on the campaign trail in New Hampshire—believing the election to be lost—and that authentic moment help swing women her way. She won New Hampshire in a surprise rout, despite being down in some polls by double digits, with the support of the women’s vote, 46% to Obama’s 34%.

Recognizing her base, Clinton played to the mostly female crowd on Tuesday in Nashua. “I feel like it’s a little bit awkward to be stating the obvious all the time: we should get equal pay for equal work,” she said calling for equal pay, by far the largest applause line she gets in most speeches.

Barbara Villandry, 70, a retired professor, said she was angry when she saw television footage of the crowd at the Sanders victory party booing Clinton Monday night when she said she was a progressive. “I know she’s progressive,” Villandry said after the Nashua rally. “I am going to her headquarters right now to work for her. This is her time. It’s time for a female president.” 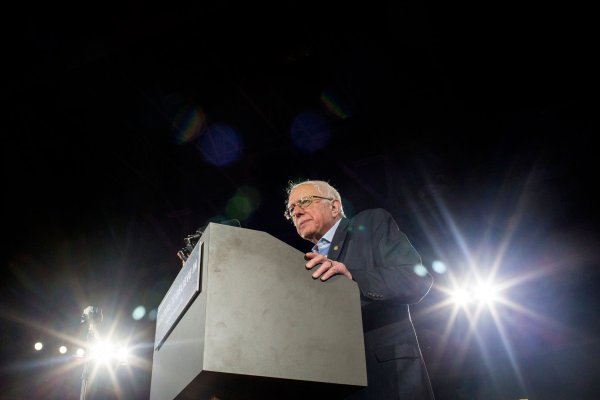 Sanders Suggests Clinton Is Not a True Progressive
Next Up: Editor's Pick