Microsoft's New Gadget Could Change How We Watch Football

Without a doubt, Sunday’s Super Bowl 50 will pay homage to the game’s past. But like Walter Payton breaking a tackle, Microsoft, the league’s technology partner, just ain’t looking back.

The Redmond, Wash. company revealed Tuesday a concept video about the future of football, showing what it could be like to watch an NFL game with its forthcoming HoloLens headset.

Showing a blitz of video, graphics, always-updating data, and hardcore fans, the two-minute preview is an eye-popping illustration of how the mixed-reality headset could change live sports. Wearing the HoloLens while watching the game on an average-sized television could allow the video to spill well beyond the frame of the screen, giving the wearer a wall-full of field, similar to the upper deck view at a stadium. (Only with access to much nicer bathrooms.) Meanwhile, graphics could pop up outside the television’s display, showing fantasy football alerts with important statistics tailored to your team.

Distracting? Maybe. But if you’re a rabid daily fantasy sports player, you’ll want one of these wearable computers to keep your head in the game.

And for the video visor, no surface is out of bounds. “What if game day was no longer confined to your television screen, but covered your room and took over your coffee table?” asks Microsoft in a blog post announcing the video. So, watch your guac, because the heads-up-display could make a 3-D graphic of your game’s stadium pop up right on the table in front of you. Fans could also get access to eye-in-the-sky and blimp-mounted cameras, in order to watch instant replay of controversial plays from all angles. And with an increasing amount of data being generated by professional sports, it wouldn’t be surprising to see ground game routes and speed data overlaid on a virtual gridiron set up on a bookcase or sidetable.

The video shows fans controlling interactive graphics with the wave of the hand and a wag of the finger, a HoloLens capability that Microsoft has demonstrated before. But it has never showed full-sized, augmented reality graphics of NFL stars busting through your living room wall. So, brace yourself, because one day you may find Refrigerator Perry hanging out in your ice box.

Since this is a concept video, there’s no guarantee that these features — like convincing Deflategate evidence —will ever materialize after Microsoft HoloLens Development Edition launches within the next few months. It’s also unclear how much a consumer version of the HoloLens might cost. But one thing is certain: If this truly is the future of football, you’re going to need a bigger coffee table. 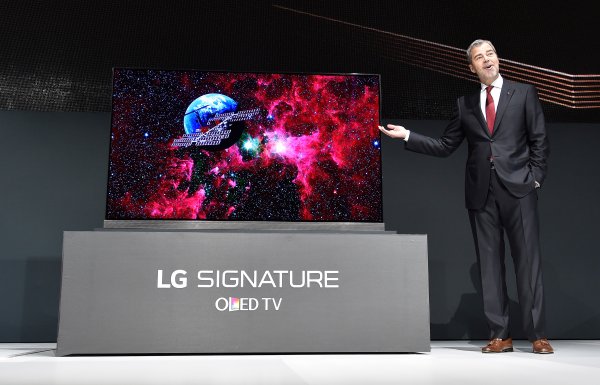 5 High-Def TVs for Hosting the Ultimate Super Bowl Party
Next Up: Editor's Pick