Presidential Campaign Moves to New Hampshire After Photo-finish in Iowa

The presidential candidates turned their focus to New Hampshire on Tuesday, with Republicans and Democrats alike looking to spin the results of Monday night’s Iowa caucuses in their favor and take aim at newly-positioned rivals a week before a primary election that could reorder the campaign again.

In the Democratic race, both Hillary Clinton and Bernie Sanders saw victory in a razor-thin contest that ended with Clinton only being declared the official victor—by a historically narrow margin—on Tuesday afternoon. Sanders’ campaign manager Jeff Weaver raised the possibility that the results of the complicated caucus process might have obscured a popular-vote win by his candidate.

“You know it’s a very complicated, nuanced process,” he said on CNN, calling for raw vote tallies to be publicly released (only final delegate counts are released, but actual raw vote totals change as the caucus process continues). “There’s human error and new technology that was just introduced that people have some concerns about.”

In her own string of interviews on Tuesday, Clinton downplayed Sanders’ strong performance with young voters and said she would win them over with her plans for college affordability and student debt relief. But she also sought to lower expectations in next Tuesday’s New Hampshire primary, where polls have showed the neighboring Vermont Senator holding a lead.

“I know that they tend to favor their neighbors. That’s the pattern,” Clinton said on CNN. “Senator Sanders is a neighbor, but I think we will have a good contest.”

Meanwhile, Republican Iowa caucus winner Ted Cruz went on a victory lap in New Hampshire, attributing his caucus win to a “grassroots army.” And Donald Trump, who had kept a low profile in the hours after a humbling second-place finish to Cruz in Iowa, finally broke his uncharacteristic silence by calling it a “long-shot great finish.” He faulted the media and voters for not appreciating his vote totals and the money he has plowed into his own campaign—and he called Cruz’s victory speech “overly flamboyant.”

“Because I was told I could not do well in Iowa, I spent very little there — a fraction of Cruz & Rubio. Came in a strong second. Great honor,” Trump said on Twitter. “The media has not covered my long-shot great finish in Iowa fairly. Brought in record voters and got second highest vote total in history!”

“I don’t believe I have been given any credit by the voters for self-funding my campaign, the only one,” he added. “I will keep doing, but not worth it!”

But it was Marco Rubio, whose surprisingly strong third-place finish in Iowa vaulted him to the top of the pack of establishment-friendly rivals to Cruz and Trump, who might have the most to prove in New Hampshire next week. While his campaign quickly sought Monday night to frame the race as a three-person contest, his rivals gave no ground Tuesday.

John Weaver, a top strategist for Ohio Gov. John Kasich, criticized Rubio’s field operation, calling him “a unique political talent”—but one who “doesn’t have much of a record.” And New Jersey Gov. Chris Christie repeatedly called Rubio “the boy in the bubble,” describing him as too scripted to be the Republican Party nominee.

“You know who the boy in the bubble is up here—who never answers your questions, who’s constantly scripted and controlled, because he can’t answer your questions,” Christie said. “Time for him to man up and step up and stop letting all of his handlers write his speeches and handle him, because that’s what they do.”

“Chris has had a tough couple of days,” Rubio responded amid a day filled with TV appearances. “He’s not doing very well, and he did very poorly in Iowa. And sometimes when people run into adversity they don’t react well and they say things they maybe will later regret.” 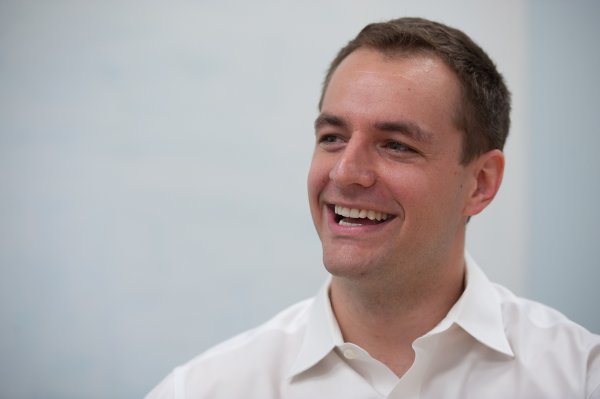 Clinton's Campaign Manager Isn't Worried About a 2008 Repeat
Next Up: Editor's Pick