Does Nigeria Have What It Takes to Defeat Boko Haram?

A mother mourns the death of her husband after Boko Haram attacked the village of Dalori, on the outskirts of Maiduguri in northeastern Nigeria, Jan. 31, 2016.
Stringer—AFP/Getty Images
By Aryn Baker

Before Boko Haram insurgents attacked the northeastern Nigerian village of Dalori on Jan.30, killing at least 86 using tactics that have become wearily familiar, government officials had started to crow that the group’s recent reliance on single target suicide attacks was a sign of weakness and desperation. Instead, the weekend attack on a village just a few miles from the provincial capital of Maiduguri, home to one of the Nigeria’s biggest army bases, was a sobering indication of the group’s resilience.

In the run-up to Nigeria’s 2015 elections, presidential candidate Muhammadu Buhari, now president, pledged to defeat the terror group by the end of the year. Technically he achieved that goal with a series of military defeats that pushed the militant group out of the northeastern towns and villages it had captured in late 2014 and back into the barely inhabited forest lands that are its stronghold. But insurgent groups don’t need territory to thrive. They need weak governance. Northeast Nigeria, where Boko Haram is based, has that in spades.

The fact that Boko Haram was able to get so close to a major army operating base has “huge symbolic value,” says Malte Liewerscheidt, head Nigeria analyst for the U.K.-based Verisk Maplecroft risk management company. Boko Haram’s return to old tactics proves that defeating them cannot be achieved by military might alone, he says. “Unless you tackle the underlying issues that have allowed Boko Haram to thrive, it doesn’t matter if you cut down the leadership. Others will just rise in their place.”

Buhari has sketched out an ambitious plan to do just that, with proposals to invest in the historically neglected northeast in order to bolster education and employment opportunities, which would go a long way towards denying support for Boko Haram. But those investments require money that Nigeria no longer has. Nearly 70 percent of government revenue comes from oil, which has plummeted in price over the past year. The country is currently in talks with the World Bank and the African Development Bank over loans of up to $3.5 billion to help with a forecasted $11 billion budget shortfall. “Buhari set up an ambitious budget which was supposed to address all these problems, but the reality is that the coffers are empty,” says Liewerscheidt.

In the absence of state development programs, Boko Haram keeps attracting local support and new members — no mean feat for an organization that has made its name abducting women and children, stealing livestock, and setting homes on fire. According to Gideon Poki, a resident of Maiduguri and the local project manager for Search for Common Ground, a U.S.-based international NGO that focuses on peace building in conflict zones, Boko Haram thrives on a combination of fear and greed. Poki works with village leaders in the region to develop what he calls an “early warning system” for Boko Haram infiltration. It is based on shared information and communication between elders, teachers and preachers.

A man walks past burnt out houses following an attack by Boko Haram in the village of Dalori near Maiduguri, Nigeria, Jan. 31, 2016.
Jossy Ola—AP

Although Boko Haram leader Abubakar Shekau justifies his actions based on Muslim ideology, Poki says he sees little evidence of religious fervor among his followers. “Most of the time, when fighters are arrested, they are arrested with drugs, alcohol or [methamphetamine] tablets. This is not characteristic of people who are fighting a religious war.”

He suspects that poverty and unemployment are far more powerful drivers. “These attacks, well, before they burn the houses down, they go and loot. They steal all items and money and food they can find.”

Fear is another powerful incentive. Even though the army garrison is just a few miles from Dalori, residents say that it took at least three hours for the army to mount a response, and another two hours for them to get enough backup to stop the attack entirely. “Not many people trust that the army will help them,” says Poki. And for good reason: soldiers often complain that corruption in the higher ranks means that they are either underpaid or underequipped.

Distrust of the army plays a significant role in Boko Haram’s deep rooted grip in the region, adds Liewerscheidt of Verisk Maplecroft. The Nigerian army has been regularly accused of committing horrific human rights abuses in the region, dating back to Boko Haram’s founding as a religious organization back in 2002, even before it started its terror campaign in 2010. “Even then the armed forces had such a heavy-handed response — summary executions, torture, forced disappearances — so trust in the security agencies has suffered immensely,” says Liewerscheidt.

On top of that there is a deep-seated conviction among many Nigerians that the state is little more than a cash machine for the country’s elite, including top military brass. “If the armed forces want to defeat Boko Haram, they will need to earn back the public’s trust,” says Liewerscheidt. “This is not a conventional war. The army needs the help of local communities to identify and expose Boko Haram operatives.”

As presidential candidate, Buhari identified many of these problems, and promised to strengthen the military, punish abuses and end corruption. But while his cash-strapped government struggles to fund these policies and boost development programs, Boko Haram is likely to keep to its own playbook of abduction and looting to fill its ranks and its coffers. 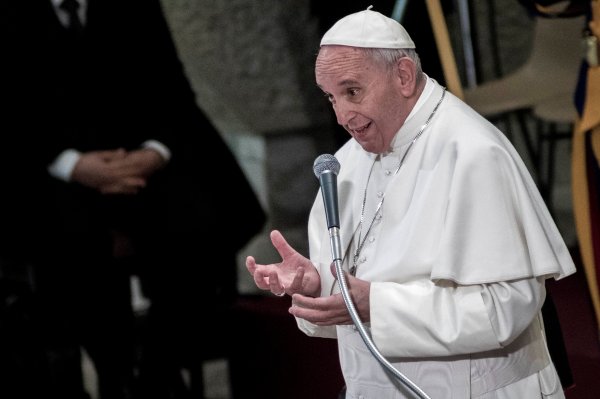 Pope Francis to Appear in Spiritual Movie
Next Up: Editor's Pick