The 5-year-old Afghan boy who became Internet famous last month — for a viral photo of him wearing an Argentina soccer jersey, improvised from a plastic bag, in honor of his hero Lionel Messi — will finally get to meet his idol.

“I love Messi and football,” young Murtaza Ahmadi said in an interview with al-Jazeera on Monday. “I will meet him one day.”

That day could come soon, with the Afghanistan Football Federation (AFF) confirming that representatives of the Barcelona and Argentine national player reached out to set up a meeting with his biggest fan.

“We are doing our best to coordinate their meeting,” said AFF spokesman Syed Ali Kazemi. “The date and the venue is still not confirmed yet, but there are chances of Ahmadi flying to Spain to meet his idol.”

Kazemi also added that the federation would do its best to ensure the young soccer fanatic’s passion earns him an eventual spot in the Afghan team.

“We will do everything in our capacity to train him,” he said.

Murtaza, who lives in war-torn Afghanistan’s Ghazni province, has seen forces of the universe — and the Internet — conspire to fulfill his dreams ever since he ran to his older brother Homayoun Ahmadi with a striped plastic bag not unlike the shirt Messi dons for the Argentina national side.

“We can’t even imagine buying the original Messi jersey. We just can’t afford it,” Homayoun, 15, told al-Jazeera. “So, to make my brother happy, I made a shirt out of that plastic bag for him.”

The photo Homayoun subsequently uploaded went viral, and it seems like Murtaza is about to get much more than just a jersey. 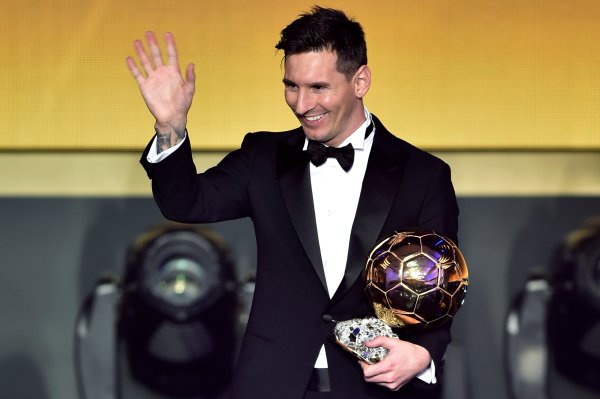