Beyonce as a Bollywood Star Is Not Cultural Appropriation

Beyonce Knowles arrives at TIDAL X: 1020 Amplified by HTC at the Barclays Center in New York on Oct. 20, 2015.
Evan Agostini—Invision/AP
Ideas
By Omise'eke Natasha Tinsley and Natassja Omidina Gunasena
Omise'eke Natasha Tinsley, a Public Voices Fellow, is associate professor of African and African Diaspora Studies at the University of Texas at Austin, where Natassja Omidina Gunasena is a doctoral candidate.

As fierce Sri Lankan and African-American feminists who have never supported white celebrities cash-cropping cornrows, white yoga teachers wearing saris and bindis, or other forms of cultural appropriation, we’re here to tell you: There’s no reason to be mad about Beyoncé portraying a Bollywood star in Coldplay’s new video “Hymn for the Weekend.” In fact, her role offers viewers a rare opportunity to see how much and how beautifully blackness is part of South Asian culture.

The Ben Mor-directed video following Coldplay singers on a cultural tourist jaunt to Mumbai received immediate criticism for cultural appropriation on U.S. social media. Arriving via taxi, the band gazes out the windows and finds fire eaters, incarnations of Hindu dieties and posters for Bollywood films. One of these posters features a film star played by Beyoncé, and Coldplay enters a theater to watch a film where she sings and dances on screen draped in a pink flowing sari and lavish gold jewelry.

For example, Twitter user @nyunouis wrote: “Yikes that video with Coldplay and Beyonce is soooo disappointing…. why can’t they film without appropriating culture.” And @kissmyazka asked: “Are we gonna discuss how Beyonce dressing up as an Indian woman for the Coldplay video is cultural appropriation, or no?”

Bollywood cinema, like any other, has its share of stars who aren’t native to South Asia. Think of light-skinned superstar Katrina Kaif, born in Hong Kong to a white British mother and Indian father. Or consider Sunny Leone and Amy Jackson, also light-skinned and of Canadian/British heritage? If they can be Bollywood stars, why can’t we imagine Beyoncé could be one?

Oh wait: Is it because Beyoncé is black?

If so, then those folks critiquing Beyoncé’s role in the video are continuing the racist obscuring of African presences in South Asia. You can read about Afro bloodlines in South Asia, yes, but you can also see it in the brown-skinned, curly-haired peoples of Sri Lanka and Southern India. And while most women in both countries are darker than Bey herself, Bollywood star Sonam Kapoor, who has a cameo in the video, is noticeably lighter-skinned than Beyoncé. This is not an attack on Bollywood’s leading ladies but a question about what beauty and belonging looks like in South Asia.

In fact, while folks in the South Asian diaspora point fingers at Beyoncé for her inauthenticity, others have expressed how empowering it is for them to see a dark-skinned woman portraying a Bollywood star.

“Beyoncé in a sari makes me tear up because I never had images of beautiful darker-skinned women in saris growing up. Because this is a healing image for me,” Shwetanaryan posted on Tumblr. “Because I had relatives clucking over how unfortunately dark I was since I was tiny… Because she’s doing what Desi pop culture still doesn’t for darker-skinned Desis, and given that how is it harmful on net for her to wear a sari, and who is it harmful to?”

So here’s a challenge: Go back to the video to think about what part of outraged reactions justly call out cultural appropriation, and what part perpetuates colorism and anti-black racism. Because all of these make our lives as women of color harder, and we’re here to resist them all. 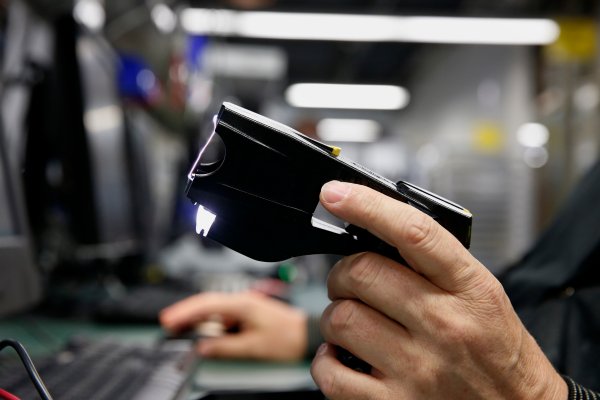 Connecticut Police Use Stun Guns More on Minorities
Next Up: Editor's Pick