See the Most Popular Professions for African Americans in 1900

Chart prepared by Atlanta University students for the Negro Exhibit of the American Section at the Paris Exposition Universelle in 1900 to show the economic and social progress of African Americans since emancipation.
Library of Congress Prints and Photographs Division
By Lily Rothman

Ahead of the World’s Fair in Paris in 1900, the writer, academic and activist W.E.B. DuBois was given a daunting task: help summarize African-American life at the turn of the century for a curious world audience gathering at the exposition. The result of his undertaking was a series of photographs, documents and charts that analyzed how far that population had come since the Civil War—and how much more work there was to do. (We looked at another document from this series, about family budgets broken down by occupation, last week.)

This particular pie chart (which you can see a bigger version of here) shows the professions chosen by black graduates of Atlanta University. The school—which later merged with Clark College to become Clark Atlanta University—was a historically black college founded in 1867, just after the Civil War. By the turn of the century, about 6,000 students had passed through. More than half of the graduates examined by DuBois and his team had become teachers. More than a quarter were housewives, and the most popular professions among the rest were the clergy, civil service and the nebulous “business.”

The school’s aim, as set forth by the Paris Exposition documents, was “to raise and civilize the sons of the freedmen by training their more capable members in the liberal arts according to the best standards of the day.” That statement of purpose gestures at the influence of DuBois on this project: one of his signature beliefs was in the importance of preparing the “the talented tenth” of the black population for white-collar jobs from which they had long been kept. (The other side of the debate, personified by Booker T. Washington, held that vocational training for a greater percentage of the population was more important.)

It’s clear from the profession break down above schools like Atlanta University made a difference for its students: among the larger Georgia population, black professionals represented a tiny sliver of the population—just half a percentage point. A whopping 90% of the black population of the state worked in either farming or domestic service. 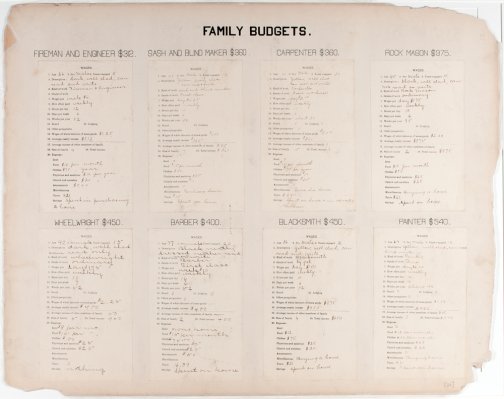