How Brazil Uncovered the Possible Connection Between Zika and Microcephaly

Isabel Albuquerque and her son in the waiting room of Associacao de Assistencia a Crianca Deficiente, a rehabilitation center for disabled children, in Recife, Brazil, Feb. 1, 2016.
Sebastian Liste—NOOR for TIME
By Alexandra Sifferlin/Recife, Brazil

It’s a Sunday in the Brazilian city of Recife, but a team of infectious disease, pediatric and neurology experts are working overtime, huddled in a back room of the Oswaldo Cruz Hospital. They are collaborating research paper about an outbreak they helped uncover: the mysterious spike in cases of microcephaly among newborns that may be linked to the Zika virus.

The team is made up of doctors from hospitals around the city including Dr. Vanessa Van Der Linden, a neurologist in this Brazilian city in Pernambuco state who helped sound the alarm over Zika early. In August 2015, Dr. Van der Linden saw a baby with severe microcephaly, a severe birth defect that involves an abnormally small head and incomplete brain development. The mother remembered that in the first month of her pregnancy she had come down with a rash, but nothing that seemed too severe.

Yet when Dr. Van Der Linden conducted the usual brain scans to determine the cause of the child’s small head, the usual suspects like rubella or toxoplasmosis were ruled out. The images of calcification in the brain looked different from other cases of microcephaly that she had seen in the past.

One day during a later hospital shift Dr. Van der Linden saw three cases of microcephaly in a single day. “It’s not normal,” she says. “Sometimes we go three or four months and don’t see a baby with microcephaly, so it was very strange.”

In the weeks that followed, she continued to see more cases, and Dr. Van der Linden started warning her colleagues that something strange was happening. Her mother, Ana, a doctor who works at a separate medical center in Recife, called her daughter to tell her that she saw seven babies in one day with microcephaly—and some of the mothers had also reported a rash in early pregnancy.

In October, Dr. Van Der Linden went to the state health secretary to alert the Brazilian authorities about the apparent spike in microcephaly cases—and the brain scan evidence that indicated a new, not yet identified agent could be the cause. That same month, the Brazil Ministry of Health reviewed birth certificates and confirmed that there was in fact an increase in cases of microcephaly in the northeast region of Brazil. The ministry also opened up a microcephaly registry for doctors and hospitals to report recent cases.

There was some suggestion from the mothers’ descriptions that the infection could be linked to the chikungunya or the Zika virus, two mosquito-borne illnesses that circulate in the region. But chikungunya was ruled out since it’s a much more severe and painful disease, and wasn’t in line with what the mothers were describing. At that point, the city of Recife launched investigations into the virus, and intensified mosquito control precautions that were already ongoing due to a massive outbreak of dengue fever—more than 1.5 million cases of dengue were reported in Brazil in 2015. In Recife alone, there was an 800% increase in cases of dengue in 2015 compared to 2014, but many of those cases may turn out to be Zika.

The similarities between dengue and Zika and chikungunya have made those efforts challenging. Current lab tests often mix up dengue and Zika—the first lab confirmed case of Zika in Brazil was in March 2015—and rapid testing is not widely available. Looking back, local medical experts say they wonder if dengue alone really was responsible for the massive 2015 outbreak. “When we put the year together, there were about 30,000 cases of notified dengue,” says Jailson Correia, the health secretary of the city of Recife. “From those cases, we have confirmation of about 60%. We can say that many of them might not be dengue cases, but could be Zika. But I would go further. Because dengue and Zika cases have cross reaction, some of the confirmed cases of dengue might have been Zika.” He says the city estimates that around 50 to 100,000 people may have been exposed to Zika virus.

Recife is one of the largest cities in Brazil but is historically impoverished, bordering the shark-infested waters of the equatorial Atlantic. The combination of warm water and 80-degree temperatures in January—summer in the Southern Hemisphere— make it the ideal home for an Aedes aegypti mosquito, which carries Zika, dengue and chikungunya. “These mosquitos are survivors,” says Correia. “They have adapted to the urban environment.” The city is regularly spraying for mosquitos, and health workers go door to door daily to clear possible mosquito breeding sites in or near people’s homes. Those precautions have been heightened amid the current outbreak, and health officials have also begun reaching out to community and religious leaders to spread the word the dangers of Zika.

Read More: Worried Mothers Fear for the Children at Ground Zero of the Zika Outbreak

Recife reported around 300 cases of microcephaly October 2015. Dr. Van Der Linden has seen around 80 cases herself. The Brazil Ministry of Health has previously reported in January around 4,180 cases of microcephaly in the country, but the true numbers are likely much lower than that, since some of the reported cases could be due to unrelated factors. For instance, other diseases or genetic problems could be responsible as well. Confirmed cases of both microcephaly and maternal Zika infection remain rare, and scientists still aren’t certain there is a definite link between the two, or how such a link works. “That is not to say it is not a problem. It’s a serious problem especially because it is spreading,” says Lavinia Schuler-Faccini, president of the Brazil Medical Genetic Society. “We might have 4,000 cases in this moment, but we might have that in the next month not only in Brazil but in other countries.”

The Oswaldo Cruz Hospital in Recife has become ground zero for fears over the Zika outbreak. On average the hospital now sees about 10 babies with microcephaly a day. One of the hardest parts of working with mothers of the affected newborns is that the physicians still don’t know for certain how the babies will progress, and many already have very different complications from one another. According to Dr. Van Der Liden, some babies experience eye problems, some suffer from very frequent tantrums and others have seizures. “They ask me how will my baby look at one or two years? It’s difficult because the damage to the brain is severe, but we can’t make a prediction of the baby in the future,” she says. “I tell the mother we don’t now, we need to follow them, and we need to help them with the problems as they appear.”

It’s still very hard for researchers to say for certain that Zika is the cause of the spike in microcephaly cases. Scientists can only show that an infection is present in a person when it is ongoing, about five to seven days after symptoms appear, says Schuler-Faccini. “Most of the babies we are seeing, if we test them for the virus, the genetic material for the virus is not there,” says Schuler-Faccini. “Our inferences are made from maternal history of infection or something that is comparable to a Zika infection like fever not too high, rash, and pain in the joints.” Still, researchers have found some cases where pregnant women with babies with microcephaly have had prenatal tests that have identified genetic material of the virus in amniotic fluid.

Dr. Van Der Linden says the number of new cases of microcephaly she sees has declined in recent months. But it’s uncertain if the city, and the country as a whole, will experience another spike, as women who may have been infected with Zika give birth in the months ahead. “We are experiencing the effect of the introduction of the new virus. How long it will take to have a better situation in terms of Zika transmission we don’t know,” says Correia.

For now, the Recife doctors are continuing to collaborate as they see new cases and follow up with the families. “It’s important for the world to know about this,” says Ventura. “We have a lot of problems that need to be solved, but the good thing is that we are people who are committed to what we do. Brazil is not just about soccer.”

Read next: See Inside a Rehab Center for Babies with Possible Zika-Related Defects 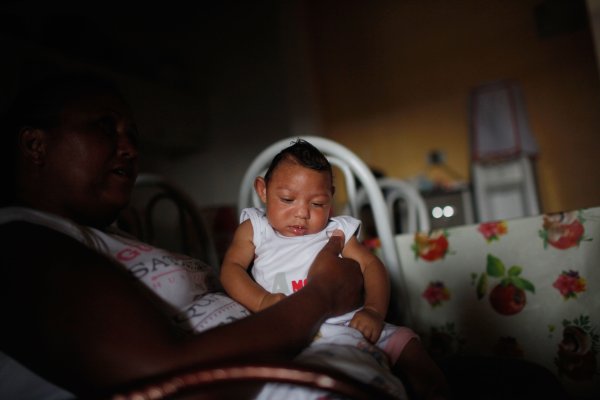 Mothers Fear for Their Kids at Center of Zika Outbreak
Next Up: Editor's Pick