Beijing is being called on to issue a tougher response to Washington after the U.S. Navy sent a destroyer to within 12 nautical miles of an island claimed by China in the South China Sea on Saturday.

China said it opposed the U.S.S. Curtis Wilbur’s presence near Triton Island on Saturday, calling it a “provocative move,” according to the South China Morning Post. But military figures and state media say this isn’t enough.

“The U.S. is stepping up its provocation and challenging China’s ability to defend its territory,” retired colonel Yue Gang told the Post. “There will probably be more provocation if Beijing does not step up.”

A Monday editorial in the state-linked Global Times said the event is a reminder that China “must retain a high growth rate of military spending in spite of the economic downward trend,” in order to compete with the U.S.

China claims many of the islands in the South China Sea, marking its territory with a symbolic Nine Dash Line. Vietnam, Malaysia, Brunei, the Philippines and Taiwan have all made rival claims to the rocky shoals and coral reefs.

The U.S. Navy did not announce its presence on Saturday, said Pentagon spokesman Jeff Davis in a statement, according to Reuters. The operation, he said, “challenged attempts by the three claimants — China, Taiwan and Vietnam — to restrict navigation rights and freedoms.”

This is not the first time the U.S. has flexed its might in the sea-lanes where $5 trillion worth of global trade passes annually. It sailed a destroyer within 12 nautical miles of the Spratlys in October, and flew two B-52 bombers over the man-made islands in November.

But state-run news agency Xinhua claimed in an editorial on Sunday that this and other freedom-of-navigation tours “threaten China’s sovereignty and security interests, endanger regional peace and stability and constitute a grave violation of the international law.” 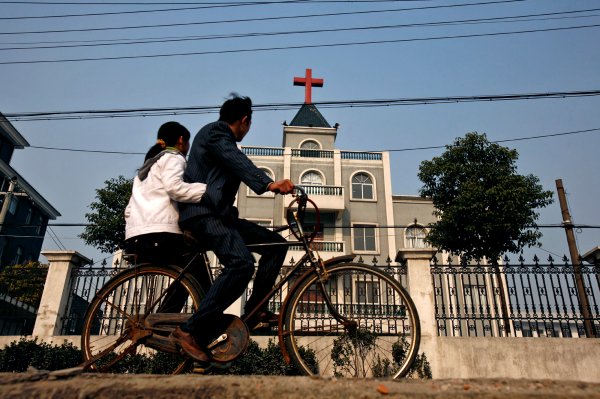 China Detains Pastor of Its Largest Official Church
Next Up: Editor's Pick