Burma's Parliament Opens in the Dawning of a New Democratic Era

Burma embarked upon a democratic era on Monday as a new parliament sat for the first time, with democracy icon Aung San Suu Kyi finally in a position to lead the country.

Nearly three months ago, street parties broke out in major cities as it became clear that her National League for Democracy (NLD) would win a majority of seats — 77% in the final count — in the Nov. 8 elections. The country has been in a state of muted excitement ever since, with many unable to completely banish doubts over whether power would truly be handed over after more than five decades under the rule of military generals or their proxies.

Suu Kyi and the NLD first emerged as a political force in 1988, when the country erupted in massive demonstrations against the one-party rule of dictator Ne Win, who had seized power in a 1962 coup. Suu Kyi, the daughter of the country’s slain independence hero, was in Rangoon by chance during the uprising to care for her ailing mother, but captivated crowds with a speech in support of the protests.

In 1989, Suu Kyi, now 70, was put under house arrest, where she would spend much of the next two decades, proving to be a thorn in the sides of Burma’s military rulers both during her incarceration and in periods of release. She won a Nobel Peace Prize in 1991, and over the years earned the devotion of most Burmese, who call her “Mother Suu.”

The NLD won a majority in elections held in 1990, but the results were ignored by the generals, who insisted a new constitution was needed before power could be transferred. It took them until 2008 to draft the charter, which laid the ground for elections in 2010. The NLD did not participate, but shortly after the polls, the government finally freed Suu Kyi and she was allowed to enter parliament through a by-election in 2012.

The constitution now stands as the major stumbling block to truly democratic rule, however. It cements the military’s role in politics, keeping soldiers in charge of key ministries overseeing security, policing and borders, and giving the Commander in Chief the right to select 25% of the lawmakers. Conveniently, it takes a vote of more than 75% of lawmakers to amend the constitution.

But on Monday, lawmakers in green fatigues were vastly outnumbered on the benches of Burma’s parliament by newly minted NLD representatives, including a number of veteran activists who spent lengthy terms in prison for opposing army rule.

The NLD’s majority gives the party — which Suu Kyi leads in an unapologetically autocratic manner — the ability to select the next President. But the generals who wrote the constitution, apparently foreseeing such a future, made sure to block her from adopting that role. The charter says the President must not have close family members who “owe allegiance to a foreign power”; Suu Kyi’s two sons are British citizens.

Suu Kyi has insisted she will simply select a President who will carry out her wishes, regardless of constitutional rules on the role of the head of state. But she has not yet named her choice, sparking months of speculation. Possible candidates include Dr. Tin Myo Win, 64, Suu Kyi’s personal physician and a former political prisoner.

Despite the setbacks, the opening of parliament suggests that a remarkably peaceful transition may nearly be complete.

Outgoing President Thein Sein, a former general who has overseen five years of tightly controlled political and economic reforms, said in a speech to the final session of the last parliament on Friday that members of his administration would cooperate with the new government to ensure a smooth transfer of power.

Thein Sein has cast his role as ensuring that Burma’s transition to democracy did not follow the path of Arab Spring uprisings that ended in civil war.

“At the time when the [Burmese] government started to implement the democratic transition, Arab nations in the Middle East started their own drives toward democratization, known as Arab Spring,” he said, according to an official readout. “Over the last five years, the Arab nations are getting further and further from reaching their original goal of democracy.” 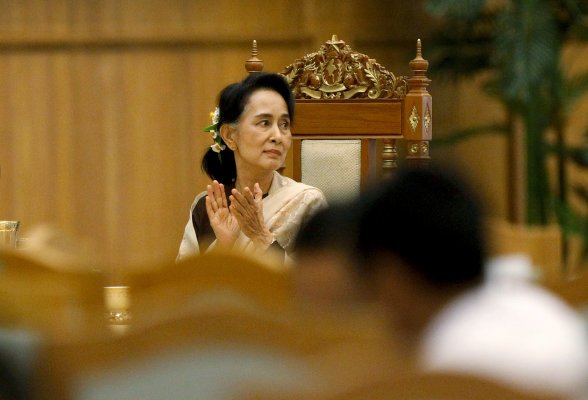