For about 20 minutes, it was as though Iowans had gone back in time four or even eight years. There he was on stage in a University of Iowa ballroom, students overflowing out of the room and chants of “President Paul” echoing through the hallways.

Ron Paul was back.

The two-time competitor for the Republicans’ presidential campaign introduced his son, Rand Paul, who is trying to finish what his father started with campaigns in 2008 and 2012. On the eve of Iowa’s leadoff caucuses, Ron Paul made his first political speech in Rand Paul’s campaign.

It was vintage Ron Paul. Ending the Federal Reserve. Reforming drug-sentencing guidelines. Ditching heavy military spending. A matter-of-fact way of telling rivals they were wrong or stupid or both.

“The revolution is alive and well,” Ron Paul said to cheers. “It’s been a few years since I’ve been here,” he said later.

Read More: Bush and Paul Quizzed About Their Dads at GOP Debate

Ron Paul’s decision to join the campaign, however, might have been too little, too late. The final Des Moines Register/Bloomberg poll released Saturday showed Rand Paul’s campaign stuck at 5%. Frontrunner Donald Trump was at 28%.

Neither Paul showed little sign of heeding the polls. “We have every reason to be optimistic. We cannot listen to polls,” the elder Paul said. Instead, he railed as he did during his last two campaigns. “Does anyone remember when we used to talk about ending the Fed?” Ron Paul said. “It’s time to bring our troops home.”

The younger Paul was feisty in his criticism of his rivals—especially his peers in the Senate also running for the nomination, Ted Cruz and Marco Rubio. He faulted both for not supporting his efforts at auditing the Federal Reserve or overhauling the criminal justice system.

“When I am President, these attacks on our liberty will stop, once and for all,” Rand Paul said at a raucous caucus-eve rally.

For his part, Rand Paul promised to shut down government programs that give federal agencies access to phone companies’ metadata to fight terrorism. He said drug addiction should be treated with health care, not jails. And he said additions to the Pentagon’s budget were unnecessary.

“You cannot be a conservative if you are liberal with military spending,” Paul said. “Recently Cruz and Rubio put forth an amendment to increase military spending by $200 billion,” he added, drawing boos and shouts of “neocon” from the audience.

Read More: Paul Returns to the Spotlight at GOP Debate

He also suggested that Trump would be a tyrant if elected, taking away rights and bullying his political enemies. “He tells you he is rich so he must be smart. If you give him power, he says he’ll fix America. There’s another tradition in America, one that believes that power corrupts,” Rand Paul said. “Trump is ignorant of this tradition. In my cases, he’s overtly opposed to the limited government philosophy.”

But it was his father who drew the more energetic response, with his promises to “put the tyrants on the defense.” Ron Paul has always had an inexplicable appeal to younger voters, and he motivated many to support his two bids for the GOP nomination. “The father of the modern Liberty Movement,” the younger Paul said of his dad.

It might not matter which man they were cheering for when they chanted “President Paul.” Iowa’s caucuses this year are taking place when college students are back on campus; during Ron Paul’s 2008 and 2012 races, they were not. That left out roughly 130,000 potential caucusgoers who might be inclined to listen to Paul’s message.

Paul’s campaign made a push to identify 10,000 college students to caucus for him. (Rick Santorum won the caucuses in 2012 with fewer than 30,000 supporters total.) If Paul’s campaign turns out those college-aged supporters, he might upend the polls’ prediction. However, a sign that might not happen: the campaign said it has lined up 8,000 students and was still looking for more Sunday night, less than 24 hours before the caucusing began. 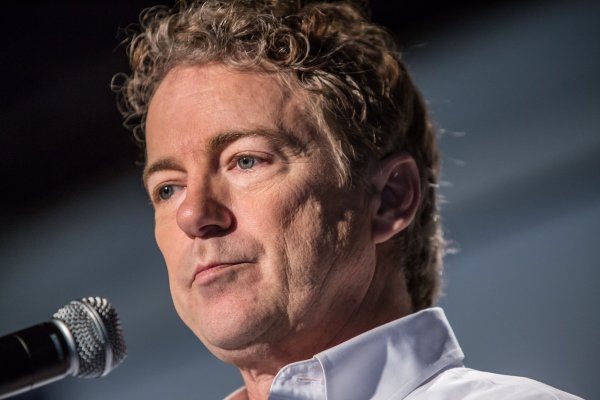