Marco Rubio warned Iowans Sunday against voting for Donald Trump or Ted Cruz, arguing they would lose the general election, in his closing argument before Monday’s caucuses.

Speaking to a crowd of more than 500 at a Cedar Rapids rally, the Florida Senator argued that electability should be of paramount importance, warning of dire consequences should Democrats win. The message didn’t specifically name his rivals, but warned against taking “a chance” on candidates who can’t win.

“The outcome will be that four years from now this speech I gave today might not be possible, it might be too late,” he said. “I ask you to please caucus for me because I know I can win.”

Later Sunday, at his final rally in Davenport, Iowa, Rubio made a fresh appeal to voters of those candidates and of lesser-polling ones to defect for his campaign.

“Perhaps you came here tonight and had someone else in mind,” he said. “Maybe it’s someone whose campaign has not done as well as they’d hoped, they’re not going to win Iowa, not going to win the nomination. I would ask you, with all due respect to consider switching. Because if I’m our nominee, we’re going to win.”

Unlike Cruz, who is focused on turning out low-propensity GOP voters, Rubio speaks openly about the need to win over additional voters to the GOP cause—a central component of his stump speech in the final days of campaigning.

“We’re not just going to unite the conservative movement, we’re going to grow it,” he said earlier in Cedar Falls, Iowa. “We are going to reach millions of people who aspire to a better future and I am going to be able to say to them, I grew up the way you are now. I come from where you come from.”

Rubio is betting that enough voters will be swayed in the final hours by his argument to give him momentum out of Iowa. 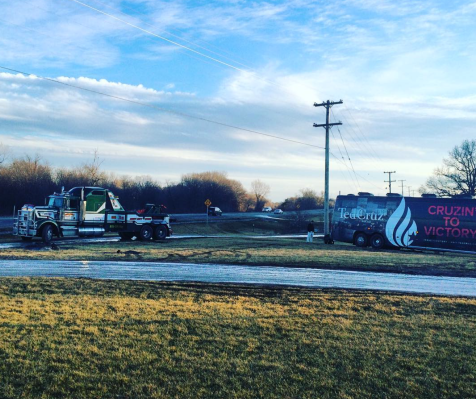 Ted Cruz's Campaign Is Literally Stuck in the Mud in Iowa
Next Up: Editor's Pick