Trump vs. Cruz: Why the Iowa Winner Could Change the GOP

The great Republican rebellion of 2016 begins Monday night in Iowa, where voters will take their first steps toward a hostile takeover of the GOP by handing a victory to a candidate promising to rattle the gilded cages of the Washington elite.

There are meaningful similarities between Donald Trump and Ted Cruz, who are locked in a tight battle atop the Iowa polls. Both are solo artists in a team sport. They’re provocateurs who treat party bosses like punching bags and channeled frustration with the status quo into surprising success.

But it’s the stark differences between the two men, in both substance and style, that have raised the stakes of a sparsely attended contest in this tiny state.

The Iowa caucuses will be first clear verdict on the unanswered question at the heart of the great GOP crackup: whether this budding rebellion will be driven by rigid ideology or inchoate rage. When they head to their caucus precincts on Monday night, Iowa voters will be doing more than giving a candidate their blessing. They’ll be defining the direction of this insurgent insurrection.

Cruz’s campaign is a pitch to the head, not the heart. It’s rooted in the promise that he alone is a pure conservative, with a proven record of standing on principle. Trump’s is predicated on the idea that he’s winner who can’t be bought, a hard-nosed negotiator who will reverse the nation’s sliding fortunes. Cruz has built a traditional campaign, with an expansive grassroots organization and precision targeting. Trump’s is more or less headquartered on Twitter. One is a former Supreme Court lawyer; the other a former reality-TV star. Cruz’s stump speech is scripted down to the pauses for emphasis; Trump spins stream-of-consciousness hosannas to himself. Cruz has a three-minute riff on EPA blend walls. Trump asks Iowa voters if he can buy their farms.

Cruz is all polish and policy. Trump delights fans by flouting political correctness. Take Winnie Meyer, 69, a longtime Republican from Dyersville, Iowa, who thinks her own party is “every bit as bad” as the Democrats. Trump isn’t the most conservative candidate, she concedes. What matters to her?

Cruz contrasts his principled record with his opponents’ ideological heresies. “We cannot get fooled again. The stakes are too high,” he told a crowd Sunday afternoon at a muddy fairground in Iowa City. “We cannot roll the dice.”

Trump, the former casino magnate, is all puffery and patriotism. “Finally, after all these years of watching stupidity, we will MAKE AMERICA GREAT AGAIN!” he tweeted.

The big question is how many new caucusgoers will be motivated by these emotional appeals. In 2012, about 122,000 voters participated in the Iowa caucuses. Campaigns are expecting that number to climb, with an influx of first-timers who are more likely to support Trump. The businessman’s magic number is about 140,000: if that many voters turn out, he’s likely to win.

Which leaves him relying on voters like Diana Schneider, a 56-year-old small-business owner from Bellevue, Iowa. She has never before caucused but is eager to help Trump on Monday. She thinks Cruz is “too conservative,” and she can’t get enough of Trump’s broadsides.

“He has said so many mean things,” Schneider marvels. “He scares people. Good. I think we need a change. He says what’s on his mind. So what?”

Donald Trump at his rally in Des Moines, Iowa on Jan. 26, 2016.
Natalie Keyssar for TIME

If Trump fans love his pugilistic spirit, Cruz supporters are drawn to his governing philosophy. His closing argument lays out ideological contrasts. “A vote for Marco Rubio is a vote for amnesty,” he said Sunday. “And a vote for Donald Trump is a vote for Obamacare.”

And while Trump’s ground game is a black box, Cruz has built the most sophisticated field operation in the state. He has more than 1,500 precinct captains, a long roster of influential pastors’ endorsements and some 12,000 volunteers on the ground, from as far away as Montana and Ireland.

The nerve center of the Cruz turnout operation is a storefront field office tucked inside a suburban Des Moines office park. From 9 a.m. to 9 p.m., dozens of volunteers hunch over cheap plastic tables, armed with scripts and caucus-night talking points. A hand-lettered sign on one wall sets the daily target at 15,000 phone calls. On Saturday the volunteers smashed that mark with more than 27,000, says Rachael Slobodien, a Cruz spokeswoman.

Many of the diehards are among the more than 800 volunteers who have bunked since Jan. 1 at what the campaign calls Camp Cruz, a converted college dormitory on the outskirts of Des Moines. One of them is Jerry Dunleavy, a 28-year-old from Columbus, Ohio, with a chestnut beard and a Buckeyes cap. Last month he quit his job at a child-support enforcement agency to come to Des Moines, where he rises at 5:30 a.m. to begin preparing for a 15-hour shift overseeing the door-knocking efforts of more than 70 volunteers. Cruz’s record of standing on principle is the reason why.

“Going against the system, in and of itself, doesn’t really mean anything,” Dunleavy says. “There’s a huge difference between Cruz and all the other candidates.”

Read More: This Is How Ted Cruz Plans to Win in Iowa

The vast chasm between Cruz’s approach and Trump’s means that there are relatively few caucusgoers deciding between the two. That’s one reason why the Texan’s campaign made a late shift in television-advertising strategy, shelving much of its anti-Trump onslaught to concentrate its assault on Marco Rubio. Surveys show that undecided voters are more likely to be waffling between the two Senators, or between Cruz and Ben Carson, who maintained 10% support in the latest Des Moines Register poll.

Rubio’s late momentum has made the race a three-man contest. He’s climbing in the polls here and is expected to finish a strong third or better. In the latest Des Moines Register poll, he notched 15% — a figure that underestimates his support, according to the internal poll numbers of multiple campaigns. Like Cruz, Rubio has followed a tested formula, keeping a low profile before swooping in for a late push designed to outpace expectations.

Marco Rubio speaks to supporters at a campaign rally in Des Moines, Iowa on Jan. 27, 2016.
Natalie Keyssar for TIME

His pitch to caucusgoers is electability. His stump speech and public image are carefully manicured, and that caution has produced among the highest likability numbers in the GOP field. At his final Iowa rally on Sunday, he suggested Cruz and Trump could leave their supporters cringing. “I will always seek to make you proud,” he told a crowd of hundreds in Davenport, exhorting them to caucus for “someone who has a chance to win the presidency.”

The Florida Senator has taken aim in the final days at Cruz’s holier-than-thou conservatism. “Ted has been very calculated, taking one position in one place and a different position somewhere else,” he said on CBS’s Face the Nation, trying to undercut Cruz’s message of standing on principle.

Regardless of whether Iowa voters opt for the ideological conservative or the larger-than-life businessman, the leaders of the 2016 anti-Establishment revolt are heartened about one thing.

“It’s an intra-family fight,” says Mo Brooks, a Republican Congressman from Alabama who supports Cruz, “and the Establishment candidates have very little chance. The campaign is down to Cruz vs. Trump. None of the rest have a path.” The question is which path the voters prefer, and it finally forks on Monday. 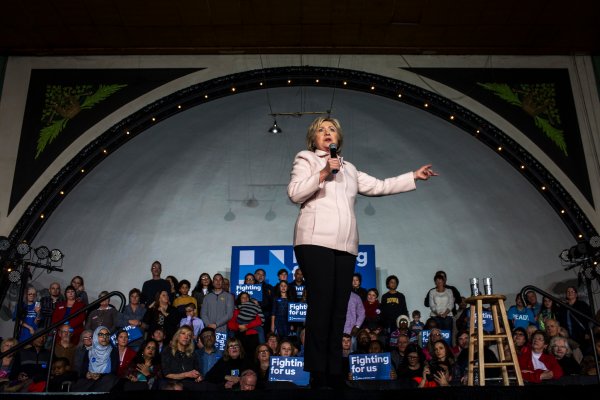 The Clinton Plan to Beat Sanders on Caucus Night
Next Up: Editor's Pick