Heading into the final days before Iowa’s caucuses, Republican front-runner Donald Trump warned supporters that his months of headline-grabbing antics could be for naught if they do not show up Monday night.

“You have to get out there and caucus, or we’ve all wasted our time,” Trump said on a tarmac, speaking to supporters who stood in a cold airplane hangar for hours to see the former Apprentice star. It was a rare suggestion from the billionaire that he might not be invincible and might well not become the GOP nominee.

“Unless I win, I would consider this a big, fat, beautiful—and, by the way, a very expensive—waste of time,” Trump said. “If I don’t win, maybe bad things happen.”

Should he come up short to rival Ted Cruz, who has taken a more traditional approach at organizing in Iowa, Trump already has his talking point ready. “You haven’t had a winner in 16 years. You pick people. What are you doing?”

Trump ticked through his polling leads in other early nominating states, a favorite feature at his rallies. Such numbers have eluded him in Iowa, though. “I’m thinking about buying a farm. Is your farm for sale?” he asked voters.

In his signature style, Trump guided a couple hundred Iowans—and more watching on television and online—through what the world would like under a President Trump. He would stiff the Iranians (“the Persians are great negotiators”) and would beat Beijing (“I love the Chinese”). Trump said the Republican Party in Washington is a “basket case” and his rivals for the GOP’s nomination are weaklings. “Why am I even talking about him? He’s at 2% in the polls,” Trump mocked former Florida Gov. Jeb Bush.

“Ted Cruz. He was not born on U.S. soil. It’s a problem. He has to solve that problem. … He was a Canadian citizen until 15 months ago. How the hell can he run for President?” He kept hammering Cruz on errors on his financial disclosure forms. “Frankly, he might not have the right to serve as President of the United States.” (Cruz was born in Canada to an American mother; most scholars agree that his birthplace alone will not be what keeps him from the White House.)

And he mocked Sen. Marco Rubio’s weak support in his home state of Florida. “Marco Rubio. He’s at a 11,” Trump said. It was typical fare from the businessman, but the crowds still love it.

True to form, Trump also kept his feud with Fox News, whose debate he skipped on Thursday night in protest. “They weren’t treating me right,” Trump said. He gloated that Fox’s ratings were lower than earlier debates.

“They did about half the number they should have,” Trump said. “It was a lousy debate. Boring. It was hard to watch. If I was there, you would have liked it.”

In a new pitch, Trump also promised to cancel the Pentagon’s contract to replace Air Force One, the presidential jet. “It does seem like an awful lot of money,” Trump said, standing in front of his own custom jet, “a beautiful Boeing. I love Boeing.”

Trump said the contract for the new airliner should be renegotiated. “I guarantee you we can do better,” Trump said, opening his rally with an issue that has seldom been voters’ concerns.

To hammer home his love of planes—and his success—he invited children to tour his airplane while he spoke to the adults for a half-hour. “Without their parents, we’ll let them run through the plane,” Trump, said. “I don’t want their parents running through. Their parents will damage it, right? The kids won’t damage it.” His plane—and maybe even his campaign—his rules. 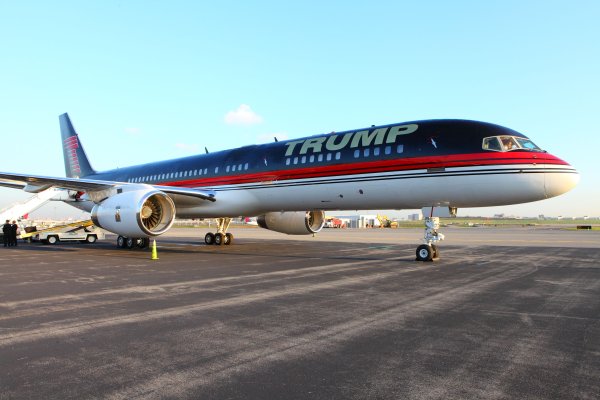 Donald Trump's Plane Does Fly-By in Iowa to Air Force One Theme
Next Up: Editor's Pick