Giuseppe Ferraro is taken into custody after he was arrested in a bunker, on Jan. 29, 2016.
AP
By Alastair Jamieson/NBC

Two top Mafia mobsters were discovered holed up in an armed underground bunker after more than a decade on the run, Italian police said Friday.

Giuseppe Ferraro, a fugitive since 1998, and Giuseppe Crea, who had eluded capture since 2006, were found sleeping in their hideout near Maropati in the southern state of Calabria, Italy’s federal Polizia di Stato said in a statement.

The pair, linked to the Calabria-based ‘Ndrangheta mafia, had a haul of weapons including a machine gun, rifles and pistols.

Ferraro, 47, was sentenced to life in prison in 2009 over more than 20 mafia-linked murders while Crea, 37, has been convicted …

[Read the rest of the story on NBC News] 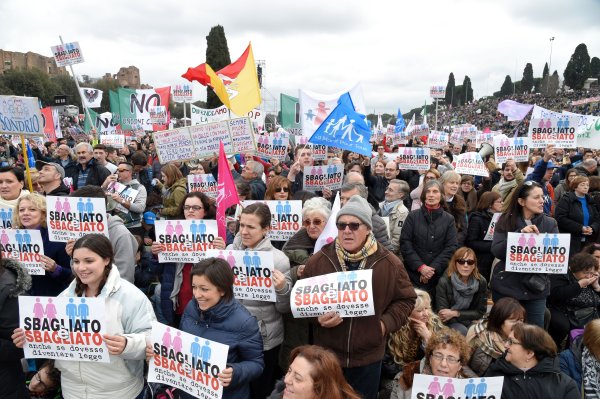 Italy Braces for Protest Against Gay Unions
Next Up: Editor's Pick