This Tablet Can Replace Your Television

Over the past couple of years, the consumer tech industry has been wrestling with hurdles impeding its growth. First, people have stopped upgrading their televisions like they did at the heyday of cheap high-definition screens. And second, consumers aren’t buying new tablets nearly fast enough to meet manufacturers’ forecasts.

But for cash-strapped students and budget-minded households, jumping off the never-ending upgrade treadmill is a no-brainer. For one, that big television they bought six years ago still displays shows and movies just well as it did the day it was unboxed. Sure, newer sets are thinner and brighter, but that’s not enough to make someone want to spend north of $700 for one. And 4K televisions? Forget ‘em — at least until ample ultra high-definition programming finally arrives.

But the new Lenovo Yoga Tab 3 Pro could be a reason to upgrade. This 10-incher won’t just replace your existing tablet, but it could also take your television’s job, too. That’s because it has a neat trick: Lenovo’s new tablet packs a 50-lumen projector able to beam its display up to 70 inches on walls, ceilings, or nearly anywhere else you point it. Breaking the mold of the thin, glass slate, the Yoga doesn’t just have better internal specs. It also adds new features to the exterior, helping this Android 5.1 tablet stand out from the increasingly commodified pack.

From a hardware perspective, the Yoga checks nearly every mark. Its 10-inch QHD IPS display is bright and sharp. Its 32 gigabytes of storage is average, but it also has a microSD slot that can accommodate up to 128 gigabytes more space. The Yoga’s Intel Atom processor and two gigabytes of RAM won’t win any awards, but its beefy 10,200mAh battery is, short of the iPad Pro, the longest-lasting power cell in a cutting edge tablet.

The Yoga is able to house such a large charge because it bucks the trend of ever-thinning tablets in favor of a new form factor that’s a refreshing change of pace. The tablet’s wedge shape makes holding the 1.47-pound device a pleasant experience, unlike the delicate flagship tablets from other makers that seem impossible to get a grip on.

This wedge also gives way to a few standout features that will make you rethink what tablets are and what they should do. Firstly, the Yoga has a sturdy kickstand that lets you prop the yoga upright, tilt it on a tabletop, or — because of a hole Lenovo drilled into the tablet’s rotating fin — hang it on a hook. Sure, you may never use that hanging hole, but you certainly never would if it wasn’t there.

Read more: Everything to know before buying a 4K television

Also embedded in the wedged end is a subtle grill of JBL speakers that kick out Dolby Atmos sound, the kind of technology that brought the fire-breathing dragon to life in The Hobbit. While no one is going to buy a tablet for its sound alone, this is a quality addition that’s worth noting, considering the Yoga’s best feature.

That feature? The projector. A differentiating inclusion in a world filled with thin, light tablets, the Yoga’s projector is great, as long as your expectations are reasonable. For instance, its focus is finicky and its visibility is faint in daylight. But for the impromptu sales presentation or a collaborative work session, it’s a good way to share the screen.

But that’s just the business end of things. At home, the Yoga is well suited for projecting streaming video in a darkened living room. Keep in mind, streaming video isn’t going to look great to begin with, and if you have bumpy walls, nail holes, or wallpaper, the image is going to be imperfect, too. But if you’ve got a small apartment, a dorm room, or just want to live minimally, the Yoga is a great way to add a big screen without having to rearrange your life around a television set. Meanwhile, the Yoga’s price — starting at $475 — makes it a screaming deal, because not only do you get a top-of-the-line tablet, but you can also buy it in place of a big-screen TV. 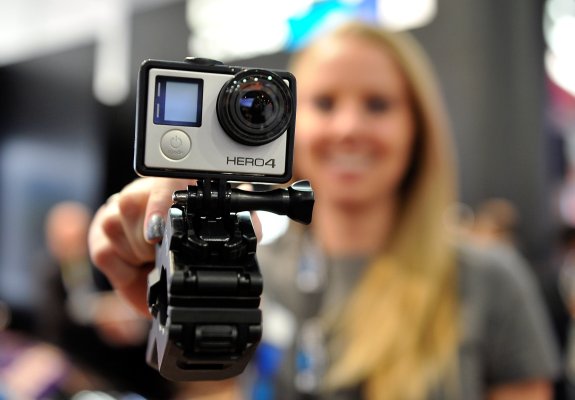 You Can Now Livestream From GoPro Via Periscope
Next Up: Editor's Pick