Le Monde’s Africa bureau chief Jean-Philippe Remy and freelance photojournalist Phil Moore were following militants from an opposition group when they were arrested in the capital city, Bujumbura. “The two foreigners were arrested in the company of armed criminals,” AFP reported, quoting a statement from the country’s security ministry. In total, 17 people had been detained.

Le Monde said that both journalists had “valid visas and were merely exercising their professional duties by meeting all concerned parties involved in the current tensions in Burundi.”

Moore is a regular contributor to Agence France-Presse. “There is no justification for the arrest of these two experienced reporters who are widely respected in the profession,” AFP chairman Emmanuel Hoogsaid in a statement directed at Burundi’s President Pierre Nkurunziza.

The arrests come as tensions in the country is at its highest since the 1994 Rwanda genocide.

For the past year, Moore, 34, has regularly reported from Burundi, as the country descended into violence following a change of its constitution that allowed President Nkurunziza to seek a third mandate.

In a TIME interview, Moore had shared his plans to dig deeper into Burundi’s economic and social situation. “Burundi is one of the poorest countries in the world,” he said. “I’ve been able to look at these other issues that underpin the problems the country is going through right now. It’s quite an important story not just because of what happening in Burundi, but also for what it means for the region.” 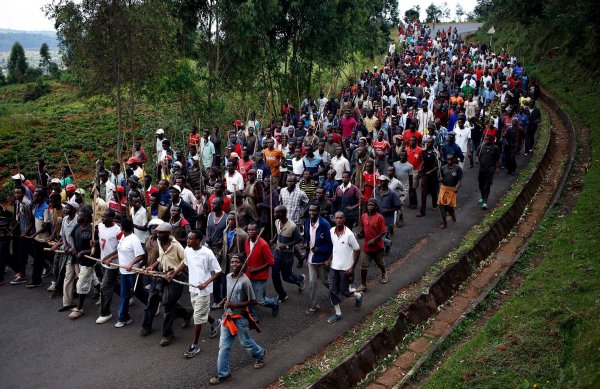 Women Say They're Being Raped by President's Men
Next Up: Editor's Pick