What Happened on Donald Trump's Plane Before the Iowa Debate

That’s the advice I get just before walking across the cold, windy tarmac at Des Moines International Airport towards Donald Trump’s private plane, a Boeing 757 that is as much as symbol of the developer’s power and prestige as Air Force One for the President.

Trump’s campaign manager and spokesperson have invited just five print reporters for a quick sit-down onboard Trump Force One before his event tonight, which he’s putting on in lieu of appearing at the Fox Republican debate. We snap photos as we ascend the steps, the blue and red plane, people walking before us. Inside, there is gold trim along the wood-paneled tables.

It’s at one of these tables that Trump himself is sitting, with his back turned to the boarding party. As we’re led to him, he stands up, gesturing for us to join him at the table, in comfortable, cream-colored leather seats. Two reporters are forced to kneel. One accidentally knocks his heavy camera on it, earning a quick Trump rebuke. “That’s going to be a very expensive picture,” he warns of the price to repair the pristine surface.

For the next fifteen minutes we ask him questions, mostly about his decision to skip the debate. Asked how many times he has spoken to Fox News chairman and CEO Roger Ailes, he says “many.” Asked if his beef with the network was largely about its moderators, he says, “I don’t care about Megyn Kelly.” And asked if he had any doubts about boycotting the debate, he says, “The time to change my mind would have been two days ago.”

Then Trump gestures to the back of the plane. “Melania? Say hello,” he tells his wife. She materializes, looking fabulous, and playing every bit the part of First Lady as she graciously beams and nods at us. Then he jokingly explains why he made her greet us: “These are the most powerful people.” This is a key to Trump’s appeal, a feature of his rise. His praise is often generous for those he thinks might help him.

Later he brings out his daughter, Ivanka, when he talks about his children’s plans to donate money to veterans in honor of his event tonight. She holds her pregnant belly in a sparkly dress. “She’s like two weeks away from having a baby and she’s here!” says the proud father. Someone jokes about her having it here in Iowa. She laughs, seeming to suggest she would rather not have her baby tonight.

The time passes quickly as Trump speaks in his usual style, with long answers to questions and the occasional bullying. About Jeb Bush: “Jeb’s a lost cause.” And about Saudi Prince Al-Waleed bin Talal: “Never liked him. Never met him. Don’t know him, just never liked him. Never liked his style.” (They got into a Twitter spat today.)

Then it’s time to leave. We say our goodbyes and are ushered out of the plane, off to the next event, where Trump will put on yet another performance. 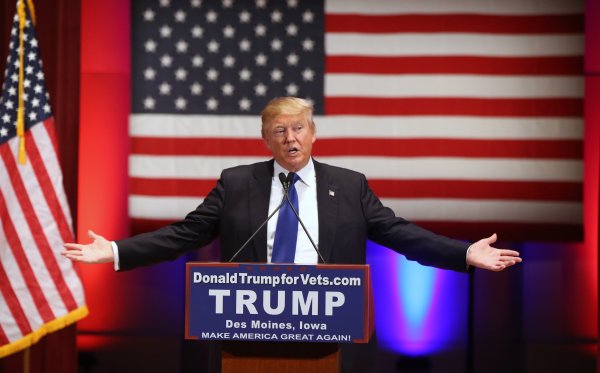