Here Are the Tough Questions Megyn Kelly Asked at the Debate

Thanks to Donald Trump, one of the key themes of Thursday’s debate was whether or not Megyn Kelly asks unfair questions. But if it bothered her to be thrust into the spotlight by the Republican front-runner, she didn’t tone down her questions in response.

In fact, the Fox News anchor asked some of the toughest questions at the seventh Republican debate, including two cross-examinations of Sens. Marco Rubio and Ted Cruz that used old TV interviews to trip them up.

Read More: Here’s the Obvious Innovation That Fox News Brought to the Debate

Below are some of the questions she asked the candidates.

To Jeb Bush: “Governor Bush, poll after poll shows you running among the worst in your party against Hillary Clinton. Even Mitt Romney said that a Bush v. Clinton head-to-head would be too easy for the Democrats. Yet still you and the super PACs supporting you continue to blanket the airwaves with cutting ads, not against Mrs. Clinton, but against your fellow Republicans, especially Senator Rubio. Do these attacks do more harm than good by targeting those candidates who appear to have the best chance of defeating Mrs. Clinton?”

To Ben Carson: “Dr. Carson, this week a female Muslim who served in the U.S. Air Force asked Hillary Clinton the question, she asked whether the United States is still the best place in which to raise her three Muslim children. Given what she perceives as a rise in Islamaphobia in this country, do you think the GOP messaging on Muslims has stoked the flames of bias on this as the Democrats suggest, and how would you answer this veteran?”

To Ted Cruz: “The divide between you and Mr. Trump has turned into one of the biggest stories in the country. And for six months that — your campaign, during this campaign, you praised Mr. Trump as somebody who you thought was an effective voice against the Washington cartel. You said you were glad that he was running as a Republican. But when he started to criticize you, your message changed, and you suddenly started to portray him as the voice of the Washington cartel, and suggested he would do the Democrats’ bidding. Which is it?”

To Marco Rubio: “Well, you have advocated closing down — closing down mosques, diners, any place where radicalization is occurring. You told me that. But the Supreme Court has made clear that hateful speech is generally protected by the First Amendment. In other words, radical Muslims have the right to be radical Muslims, unless they turn to terror. Doesn’t your position run afoul of the First Amendment?”

To Chris Christie: “In December, two radical Muslims killed 14 people in San Bernardino, California. Neighbors of the terrorists said that they did not report the couple to law enforcement prior to the crime, because they were afraid that they would be accused of profiling. Now, you have said that we should not profile. How do you square that with the San Bernardino case?” 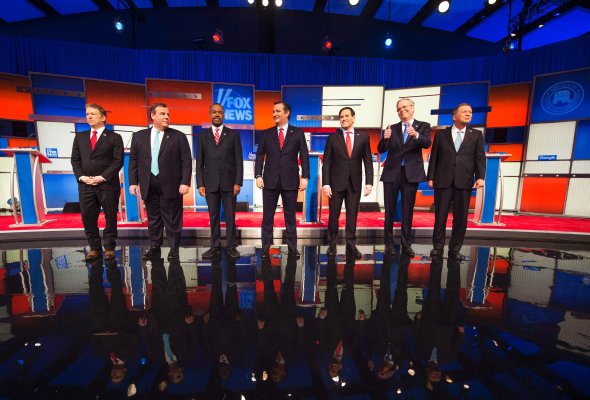 The Dawn of Reality TV Politics
Next Up: Editor's Pick