President Obama declared definitively that a Democrat will succeed him next year, telling a gathering of House Democrats his confidence stems from his belief that Democrats have the American people’s best interest at heart. “Democrats will win in November,” he told the House Democratic caucus during their issues meeting in Baltimore, Md.

“We are on the right side of this debate,” he said. “We’re not cynical we genuinely believe that everybody should get a shot.”

“During this election season there’s a lot of noise and a lot of talk about America in decline,” the President added, continuing the optimistic rhetoric that has become a theme during the last half of his second term. “And as I said at the State of the Union I don’t believe it and the facts don’t show it.”

The President only spoke for about 15 minutes before the friendly crowd of House Democrats, and occasionally deviated from defending his record to throwing subtle jabs at the Republican Party. “As Democrats,” he said, “we believe in science—I know it’s a radical proposition.”

Obama appeared before a more intimate crowd of his Congressional colleagues during his speech on Thursday than he did when he first took office. There are 188 Democrats in the House, compared to 257 when he arrived at the White House, and the Democrats’ chances of regaining control in the near future are slim. Yet, Obama remains confident that his party is the right choice to lead the American people.

Obama also steered clear of choosing sides in the tightening Democratic primary contest and the perceived division within the party given the differences between Sen. Bernie Sanders and former Sec. of State Hillary Clinton.

“The press has been focused on debates and divisions that they can drum up in the party,” he said. “I’m not worried about this party staying united.” 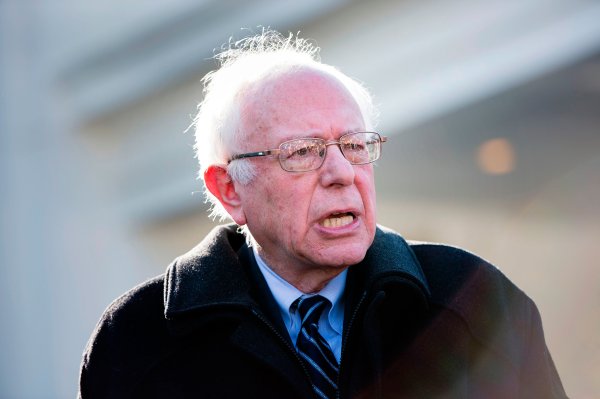 Bernie Sanders Meets With Obama at White House
Next Up: Editor's Pick