Why Huckabee and Santorum Will Attend Trump's Rally

During an undercard debate held before the main event, Santorum argued it was his best chance to get media coverage and noted the event is designed as a veterans benefit.

“I’m not going to attack Donald Trump. What I’m — Mike Huckabee and I were asked to come to an event where money was going to be raise to do help our veterans. You know, I thought about it,” the former Pennsylvania Senator said. “And I thought about. I said well, wait a minute, now, if there were no political considerations and I had some time because I’m not doing anything at 9 tonight.”

Huckabee, who was not asked about the event, had a similar response earlier in the day.

“I’m delighted to join with Donald Trump in an effort to salute veterans,” the former Arkansas Governor told CNN anchor Wolf Blitzer. “I didn’t have anything going on at 8 tonight. I’ll be done, so I figured, ‘Why not? Let’s show the veterans our support.'”

Huckabee and Santorum, who won the Iowa caucuses in 2008 and 2012 respectively, are both polling at 2% or less in the state, according to a polling average from RealClearPolitics. Both have seen their base of support of Evangelical Christians in the state instead go to front-runner Trump and his chief rival, Texas Sen. Ted Cruz.

In his first appearance at a Republican debate, former Virginia Gov. Jim Gilmore harshly criticized Huckabee and Santorum for attending the rally, which Trump announced after complaining that Fox News moderator Megyn Kelly is biased against him.

“I’m the only veteran, Bill and Martha in this race,” said Gilmore, a former counterintelligence agent with the U.S. Army. “And I’m not going to any Donald Trump event over across town on some sort of faux veteran sort of issue.”

He returned to the point later in the debate.

“I’m not about to go across town tonight to carry the coat for some billionaire,” he said. 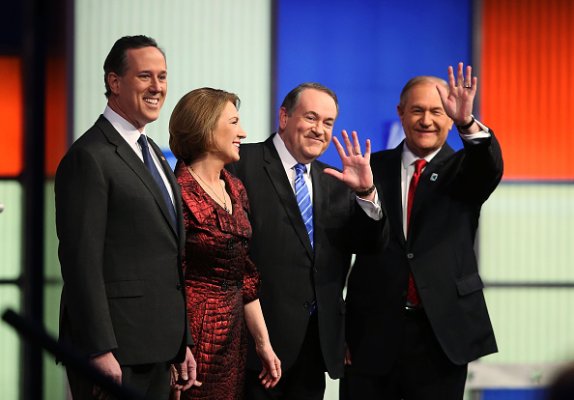 The Sad Sideshow of the Republican Undercard
Next Up: Editor's Pick