The Sad Sideshow of the Republican Undercard

Presidential campaigns are where egos go to die. You spend months as a traveling salesman, your mind is the product, and in the end the voters almost always buy something else. But rarely is the brutality of the process clearer than it was Thursday evening in Des Moines.

Four days before voting begins here, the past two Iowa caucus champions were relegated, once again, to an “undercard” debate where the main line of inquiry was what went so wrong. The first question for former Arkansas Gov. Mike Huckabee, who won the 2008 contest here with the most votes in Iowa caucus history?

“Why is your message not working?”

A similar smackdown awaited former Pennsylvania Sen. Rick Santorum, who rode a classic Iowa retail campaign to an upset win four years ago. His first question from the Fox News moderators was “Is Monday night your last stand?”— a milder euphemism for “When are you going to go away?”

How did the reigning caucus champs wind up at a pre-dinner debate that even the moderators seemed annoyed to be at, on a JV team next to Jim Gilmore? (The first question for Gilmore, who hasn’t held a single Iowa event: “Why should anyone caucus for you on Monday night?”)

It’s not because Huckabee and Santorum didn’t work it. They are one-two in total events in the state. Santorum is practically a one-man tourism industry, racking up some 90 nights in Iowa since winning the 2012 caucus. Both candidates dusted off the tested playbooks that once lifted them to glory, crisscrossing each of the state’s 99 counties, hoping that hand-to-hand retail spadework would pay off again with Iowa’s social conservatives.

It has not worked. Huckabee sits in eighth place in the Hawkeye State, with 2% in the RealClearPolitics polling average. At less than 1%, Santorum sits dead last. “I got zero,” Santorum spluttered of a recent poll. “Why? Because the NBC/Wall Street Journal poll never includes my name.”

Media stratification may have played a role. But the bigger problem was an age-old political saga: they got ditched for newer models. In 2016, businessman Donald Trump and Texas Sen. Ted Cruz are winning the voters who once caucused for Huckabee and Santorum.

Trump’s mystifying success with Christian conservatives doesn’t seem nearly as galling to the two as does the rise of Cruz. Santorum’s first campaign ad attacked Cruz for not being a true social conservative. A pro-Huckabee super PAC pumped more than $1 million into an ad campaign that assails Cruz as a two-faced phony who doesn’t tithe. Huckabee even worked two Cruz digs into a light-hearted video parodying an Adele song.

If the debate was their valedictory, it wasn’t a particularly memorable one. The candidates ignored questions, blew through time clocks and turned up the volume in hopes of finally being heard. Both seemed to know the dream was dead. “I just want to thank the people of Iowa,” Santorum said in his closing statement. “It has been an incredible ride.” (Huckabee, for his part, decided to quote Adele.)

When it was over, the two former winners were heading across town to drop in on the pre-caucus counter-programming scheduled by Trump. It wasn’t the final chapter either candidate was hoping for. But sharing a marquee with the Donald offered a consolation prize of sorts: not just the brief taste of frontrunner status, but also the chance to play spoiler against Cruz. If they weren’t going to be relevant, at least they might have revenge. 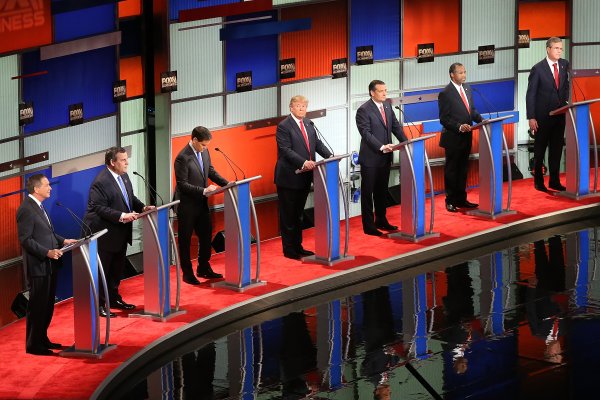