The Iowa-based American Future Fund is a conservative nonprofit linked to the billionaire brothers Charles and David Koch that since 2010 has inundated federal and state races with tens of millions of dollars.

But it seems the Ohio governor, while a Republican, is not right-leaning enough for the group.

“John Kasich — not a conservative. Not even a moderate. An Obama Republican,” the ad’s narrator says. The ad zeroes in on Kasich’s purported support of Common Core educational standards, Medicaid expansion and tax increases.

Airing in New Hampshire markets, the ad flurry follows Kasich’s recent surge in the Granite State. Kasich nabbed endorsements from two newspapers there and is making a strong showing in New Hampshire polls. But if American Future Fund has any say, Kasich will flounder in the first-in-the-nation primary on Feb. 9.

This likely will not be American Future Fund’s sole appearance in the 2016 presidential race.

Consider this: The “dark money” nonprofit spent just under $21 million in the 2012 presidential race, with more than half of that directed to touting defeated Republican nominee Mitt Romney. And during the 2012 federal election, American Future Fund ranked fourth among nonprofits in spending, according to the Center for Responsive Politics.

Like all 501(c)(4) nonprofits — or “social welfare” organizations — American Future Fund does not have to disclose its donors, so its cash flows are largely untraceable. Such nonprofits can’t make politics their primary purpose, but these groups continue to inject hundreds of millions of dollars into elections.

Its primary purpose, at least according to its tax filings, is “to educate and advocate for conservative, free market ideas.” Though in the past, watchdog groups such as Public Citizen have asked the Federal Election Commission to investigate whether American Future Fund’s true intent is to influence elections.

There are numerous examples of American Future Fund entering the political arena.

The group even involves itself in island matters. The group sponsored ads in 2014 that attacked Puerto Rico’s Democratic Gov. Alejandro Garcia Padilla.

Sandra Greiner, a former Iowa state senator, is the president and director of American Future Fund. Allison Kleis, who worked on George W. Bush’s 2000 presidential campaign, is also a director.

Exactly how much the group will raise this election season will remain a mystery until long after ballots are cast. As a nonprofit, American Future Fund reports to the Internal Revenue Service once a year.

That year, most of the group’s revenue came from two Koch-linked organizations: the Center to Protect Patient Rights and Freedom Partners Chamber of Commerce — groups that cumulatively contributed $62.8 million in 2012.

The funder’s identities are largely are unknown, but in 2014, three people contributed more than $1 million.

The group has been tied to several individuals. In 2010, The New York Times identified Iowa businessman Bruce Rastetter as providing seed money for American Future Fund. Rastetter is co-founder of Hawkeye Energy Holdings, one of the nation’s largest ethanol producers.

American Future Fund plans to spend $1 million on ads in New Hampshire markets, according to The New York Times. So far, Federal Communications Commission filings indicate that the group has placed about $600,000 in ads.

Why watch this group

To put it simply, American Future Fund is one of the biggest “dark money” spenders in the game.

There’s little doubt that 2016 will be any different. In the past though, American Future Fund was absent during primary elections and it rarely attacks Republicans, making its attack on Kasich more interesting. 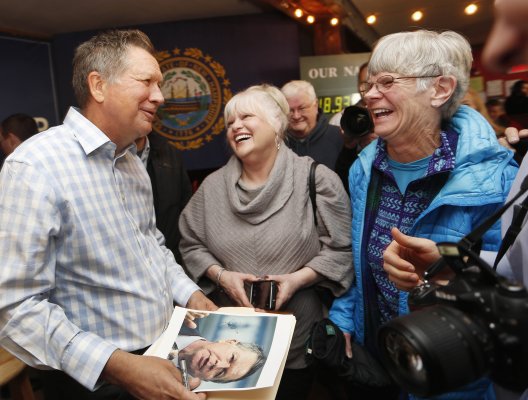 Why John Kasich Warns of Donald Trump–Led Witch Hunts
Next Up: Editor's Pick