Gael García Bernal won a Golden Globe for his role as a brilliant, tempestuous conductor on Amazon’s Mozart in the Jungle; it was the latest milestone in a career that’s included foreign-language hits like Y Tu Mamá También, The Motorcycle Diaries, and No. Though the performance is as alternately frenetic and controlled as a conductor’s management of a symphony, don’t compare García Bernal to his character: “They have to train for six hours a day,” he says. “I’ve never had anything like that.”

Indeed, García Bernal’s preparation for the role consisted in large part of listening to music, though he admits he’s only just scratched the surface of his musical education. For Mozart in the Jungle, whose first two seasons are currently streaming on Amazon, he relied largely on Beethoven and (yes) Mozart, and he’s gotten his two young children involved in music two. As he told TIME: “If a kid grabs an instrument, he will never grab a gun.” García Bernal spoke to TIME after his Golden Globe win earlier this month.

Many people were surprised by your show’s, and your, Golden Globe wins. Did they surprise you?

Honestly, I wasn’t expecting it. I felt like it was a very long shot, to be realistic. Obviously, the show has been getting really nice life, organically, with people recommending it to other people. It’s a very different part of the world, and little by little has been getting its own gravitational pull, but it’s very hard to measure these things. Whomever I met that saw the show told me really good things—but I didn’t know how these things work. When the show won, I couldn’t stop laughing, because there’s an aspect of ridiculousness to all of this. Not in a bad sense, but in the sense of incredulity, complete and absolute awe. And then when they announced my name, everything became slow motion. It was incredibly surprising: I couldn’t understand how, when, why.

How do you train to play a conductor—such a particular and delicate skill?

With geniuses, it’s very difficult to portray them and really get a hold on what they’re doing. That’s why they’re geniuses. Coming in from the outside and understanding the leap and the somersault that they do in their lives when approaching this character, I said, I need to understand the basics of something.

To be a conductor, you have to study so much music, and be able to read music, be an expert in two instruments. None of those I had. I started to little by little pray to the gods of music, apologizing from the very beginning, and just grabbing the baton and pretending I’m conducting. I took lessons with a really good friend of mine who’s a young conductor, and then took a master class with Gustavo Dudamel. I’m going to keep on practicing and keep on loosening up.

Has playing the role made you more observant or critical of music?

Yes, absolutely, but coming in from a music-loving perspective, my mind is completely open as well. I haven’t even touched jazz. There’s so much to discover; I’m going step by step. I’m still listening to Mozart! Beethoven is my universe.

Musicians, as we see, give up so much to follow their art. Did the role resonate with sacrifices you made earlier in your career?

That’d be a really arbitrary comparison. Because they have to train for six hours a day, every single day. I’ve never had anything like that. I think the fact of keeping an open perspective and being curious and keeping myself excited in any situation I’m in, it’s spiritually connected. That’s an integral part of my job.

The show also portrays just how difficult it is to get funding for the arts. Is it difficult to be an artist and get meaningful projects made?

Music is so intangible and sophisticated and difficult for people to get—people love its intricacies and its delicious construction, but it’s difficult to go to a show. Looking back on the history of music, how it came about, it’s got its benefits and its problems right from the beginning. The type of music we know as classical music began with rich people hiring musicians, or owning them in a way. Without funding, it’s very hard to have this experience. Be it state money or private money, there has to be someone dedicated to raising the money. But it’s always going to be a difficult battle, and there’s no clear solution. Dudamel comes from a state-funded program in Venezuela, which began with one teacher gathering kids in his garage. Now there must be a million kids around the world studying in El Sistema. If a kid grabs an instrument, he will never grab a gun.

Now that you’re on TV, do you watch TV?

I’m busy working and busy being a father. The day still has 24 hours! We were so delighted getting to the awards because there’s so much happening right now. I just saw one episode and really liked it, but I want to follow Mr. Robot. And The Wire is one I watched a few years ago. But I’m new at watching these novelas, these series. I’m very new at watching them, because for a while I didn’t see them at all.

Do you play classical music for your kids?

I do, and I put it sometimes in their faces! I tell them what the instruments are and I conduct as well. They come with me to see orchestras as well, in New York, and it’s fantastic. Music is really nothing if you think about it—it only becomes something when somebody listens to it. And then it becomes uncontrollable. My kids are starting to accept it and integrate it into their system and who knows what the outcome will be? Surely it will be wonderful and beautiful. It’s an amazing world that you can just fly with and discover so many things about yourself. It’s like poetry—a journey into oneself. 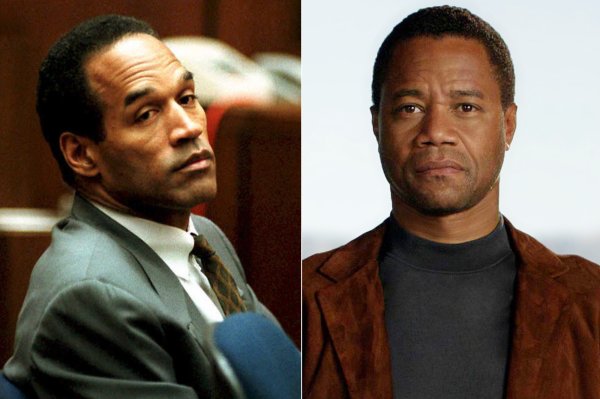 See How the People v. O.J. Simpson Actors Compare to Their Real-Life Counterparts
Next Up: Editor's Pick