How Cam Newton Became the Face of the NFL

A fired-up Newton will lead Carolina against Denver and Peyton Manning in the Super Bowl on Feb. 7
Grant Halverson—Getty Images
By Sean Gregory

The code of conduct for a star quarterback in the NFL is as closely cropped as Johnny Unitas’ crew cut: be commanding but not too emotional, be driven but never showy, display enough personality to sell pizza–but not so much that some fans won’t want to buy it. In other words, be a lot like Peyton Manning.

For 17 seasons, Manning has embodied the marquee job in America’s most watched sport with vanilla excellence. The son of an NFL quarterback and brother of another, Manning acts like a CEO on the field, coolly reading defenses before dissecting them with surgical passes. Touchdowns rarely merit more than raised arms. This approach has led to a fortune in endorsements, a league-record five MVP awards and a Super Bowl title.

But as Manning leads the Denver Broncos into Super Bowl 50 on Feb. 7, the injury-riddled 39-year-old will be doing more than trying to win what could be his final pro game. Whether he likes it or not, Manning will be ceding his role as the face of the NFL. The heir? Manning’s opposing quarterback and stylistic opposite, the Carolina Panthers star Cam Newton. And his ascension could be one of the best things to happen to the NFL.

A sport defined for a decade by two aging stars–Manning and Tom Brady–and haunted by headlines involving brain injuries and domestic violence could use fresh air. (Manning now finds himself fighting allegations of performance-enhancing drug use, which the NFL is investigating.) Newton, the sixth African-American quarterback to start a Super Bowl, is a charismatic free spirit unburdened by the conventions of being a franchise quarterback. And even in a league filled with dazzling talents, the 26-year-old Newton stands out. Built like a linebacker–6 ft. 5 in. and 245 lb.–with the speed of a running back and the skills of a topflight quarterback, Newton can run past defenders, overpower them and outfox them with shrewd passes. And unlike his stolid predecessors, Newton celebrates those big plays like he just hit the Powerball. “I don’t think we’ve seen a quarterback like Cam Newton,” says Hall of Fame quarterback Kurt Warner, “and I don’t think we ever will again.”

Rewriting the rules has made plenty of people uncomfortable. In November, following a Panthers win over the Tennessee Titans, a Tennessee fan complained in a letter to the Charlotte Observer that Newton’s celebrations exposed kids to “egotism, arrogance and poor sportsmanship.” (Never mind that following a touchdown Newton usually gives the ball to a kid in the stands.) On social media, Newton is routinely disparaged as a “thug”–a term with unsubtle racial overtones. “Particularly in these times, nobody is going to come out and say, Cam Newton’s a black quarterback, and I don’t like the way black people behave in public,” says Todd Boyd, a professor of race and popular culture at USC. “Instead, what they’re going to do is attack his style.”

And in any case, Newton is well on his way to transcending his critics. After Newton made dabbing, a once obscure dance step, part of his celebratory routine, the move quickly went viral. And big brands have happily hitched their wagon to the mold-breaking star. In 2015, Newton made at least $11 million shilling for companies such as Under Armour, Beats by Dre, Gatorade and Dannon–a haul on par with Manning’s. “Cam has not toned his game down,” says Boyd. “He’s really amped it up. And so, what better place than the most watched television event of the year for him to demonstrate to the world who he is?”

If anything can crush Newton, it won’t be the haters–it’s Denver’s league-best defense, which beat up Brady in the AFC championship game. No matter the outcome, this Super Bowl will mark a passing of the plaster-cast quarterback. Let the fun–finally–begin. 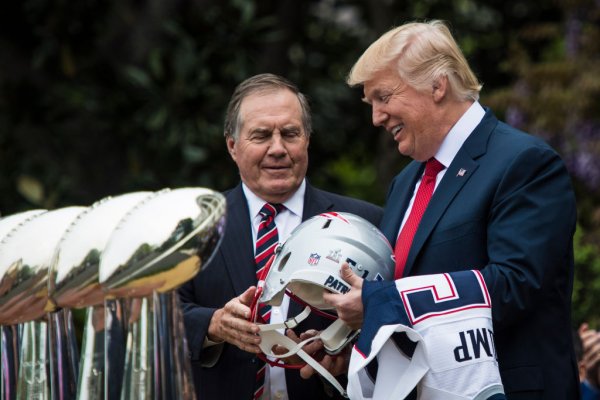