In an effort to rebut criticism from Hillary Clinton, Vermont Sen. Bernie Sanders’s campaign told TIME that he will cosponsor a Democratic bill to repeal legislation granting gun manufacturers immunity from legal liability.

“It has a section which says we should not be selling ammunition which will pierce policemen’s armor and protection. I think that’s the right thing,” Sanders said. “It had a section in it which said that we want to have safety locks for children on guns. That makes sense to me.”

But as a House member in 2003, Sanders voted for an early version of the Protection of Lawful Commerce in Arms Act which did not have those gun safety provisions. One influential gun safety advocate and Hillary Clinton ally is calling foul.

“Sanders actually voted for PLCAA before it included those amendments,” said Dan Gross, president of the Brady Campaign, which has endorsed Clinton. “He voted for the first version that didn’t have it, and then he voted for second version that did. So forgive us for not buying it.”

A spokesman for the Sanders campaign said that his support for the 2003 bill was due to concerns over how lawsuits over guns might affect “mom-and-pop gun store owners.” Some research shows, however, that small gun sellers are responsible for large numbers of gun sales to criminals.

Sanders’ support of the 2003 version of the bill, which passed in the House of Representatives but did not make it through the Senate until its 2005 incarnation two years later, is a reflection of the tricky terrain the Senator has found himself in on guns. It is one of the few issues on which Hillary Clinton is more liberal than Sanders, and gun control has wide support among progressive Democrats.

Sanders has taken heavy criticism from Clinton and her allies for supporting the 2005 bill, which the NRA’s Wayne LaPierre called “the most significant piece of pro-gun legislation in 20 years.” The law protects gun manufacturers and sellers from legal liability, a rare immunity granted to a large industry.

But Sanders has defended his overall record on guns as well, saying that he has supported an assault weapons bans and is now pushing for tightening gun sale loopholes and mental health checks. But Clinton has moved to corner the Sanders campaign, suggesting he is weak on gun control by pointing to his votes against the Brady Bill, which made background checks universal.

The Equal Access to Justice for Victims of Gun Violence Act was introduced Wednesday by Democratic Sen. Richard Blumenthal of Connecticut and Democratic Rep. Adam Schiff of California, both of whom have already endorsed Hillary Clinton.

Sanders already signaled earlier this month that he will support a bill that would repeal and said for months that he would reconsider his vote. 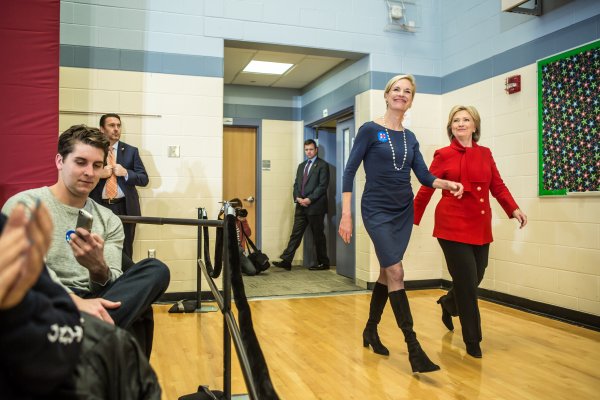 Bernie Sanders Struggles to 'Champion Women' like Hillary Clinton
Next Up: Editor's Pick