As the Iowa caucus looms and Donald Trump still holds a commanding lead in most polls, one U.S. Senator is taking to social media and the campaign trail to try to bring him down.

Ben Sasse, a Republican from Nebraska, began tweeting a series of pointed questions at Trump Sunday night, aimed at everything from his shifting views on health care and gun control to his past marital infidelities. (The tweets came from Sasse’s personal account.)

On Tuesday, Sasse’s office released a statement saying he was heading to Iowa to campaign with Florida Sen. Marco Rubio, Texas Sen. Ted Cruz, and “possibly other constitutional candidates,” but that he has not endorsed anyone for president. An email from former Hewlett-Packard CEO Carly Fiorina’s campaign said Sasse will appear with her Wednesday evening.

“We are in a moment of constitutional crisis. America already has one post-constitutional party; we don’t need another,” Sasse said in a statement. “I’m pro-Constitution, and if that makes me anti-Trump, that’s Mr. Trump’s problem.”

At a press conference in Marshalltown, Iowa, Tuesday night, Trump was asked if he felt if it was unfair of Sasse to bring up his marital affairs on Twitter.

But then Trump reversed his position a few minutes later when he was asked about Sasse again.

“It’s not a cheap shot,” he said. “I’ve had a very good life. I’ve been a very good person over my life. I’m a religious person. I’m a good person and I give money to charity, a lot of money to charity. I feel you can bring up whatever you have to bring up.” Trump himself has repeatedly attacked former Secretary of State Hillary Clinton on her husband’s past sexual exploits.

It was also at that press conference that Trump said he “probably” would not attend the Fox News Republican debate on Thursday, and later that evening that his campaign announced that he would definitely be skipping the debate.

Sasse once again took to Twitter, calling Trump out for his feud with Fox’s Megyn Kelly:

Trump remains in first place in Iowa polls as well as national. According to a RealClearPolitics average, Trump is at 33.2% in Iowa, with Cruz in second place at 27.5%. 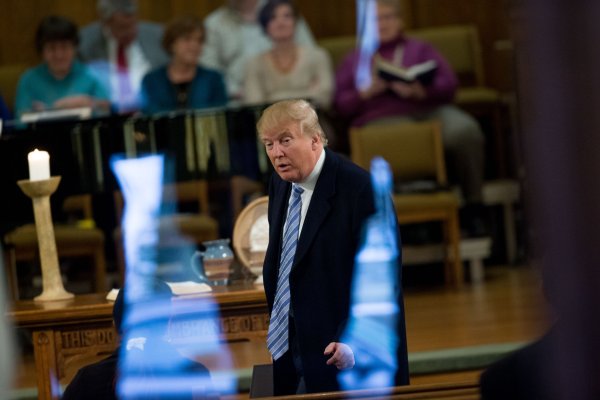 Religious Voters Embrace Donald Trump Even If He Lacks Faith, Poll Says
Next Up: Editor's Pick