Critics of Malaysian Prime Minister Najib Razak are decrying the decision made on Tuesday by the country’s Attorney General to dismiss corruption charges levied against him, the Wall Street Journal reports.

For months, Najib has been the subject of unprecedented political antipathy in Malaysia, following reports printed by the Journal and the investigative news site Sarawak Report alleging that he funneled around $700 million in cash from an ailing state development fund into his personal bank accounts. Anger over the 1Malaysia Development Berhad (1MDB) scandal, named for the fund Najib allegedly exploited, drove hundreds of thousands of Malaysians into the streets of Kuala Lumpur and other cities last August to demand the Prime Minister’s resignation. It was the largest protest in Malaysia’s history.

Yesterday, Attorney General Mohamed Apandi Ali released a press statement affirming Najib’s innocence, saying that the funds in question had in fact been a political donation from unnamed royalty in Saudi Arabia. But following the announcement of Najib’s official exoneration, critics spoke out against the decision, which many said exemplified a system of endemic corruption.

“The notion that the Saudi ‘royals’ would ‘donate’ hundreds of millions of dollars to a foreign leader, as opposed to a government institution, struck me as suspect, to say the least,” political analyst Fahad Nazer told the Wall Street Journal.

“The nature of Najib’s excuses and their acceptance by the Attorney General — which has infuriated many in the anti-corruption agencies who investigated the matter — have made this prime minister an international laughingstock,” Clare Rewcastle Brown, the Malaysian-born founder and editor of Sarawak Report, said to TIME in an email on Wednesday. “Is he seriously saying that he thought he had paid [the funds] into his personal account from the ‘donor’ account? … If he is, then the proverbial saying that he ‘shouldn’t even be running a sandwich stall’ comes to mind.”

Malaysia’s anticorruption agency said on Wednesday that it would review the Attorney General’s decision, Reuters reported. 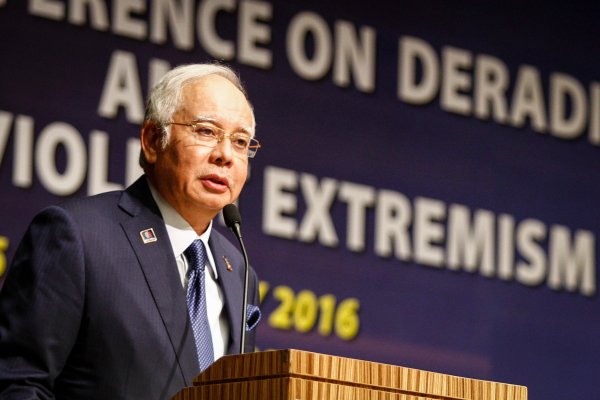 Malaysian Prime Minister Cleared of Corruption
Next Up: Editor's Pick